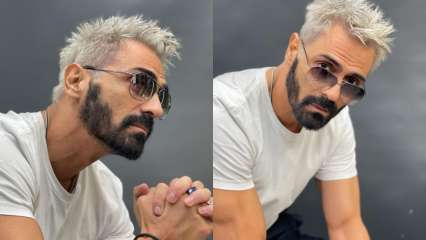 Actor and model Arjun Rampal looked absolutely unrecognisable as he rocked his new when he stepped out of hairstylist Aalim Hakim’s salon on Thursday (June 17).

The actor often experiments with his looks but this might be the most extreme look till date. Arjun was seen in a white shirt and black shorts, wearing a black mask and sunglasses. His hair was cut short and dyed platinum blonde. Later, he posted a picture of himself on Instagram which suggested that he got this new look for his upcoming film ‘Dhaakad’ starring Kangana Ranaut. He captioned it, “A challenging part in a film, needs me to push the envelope. Thank you my brother @aalimhakim for helping me create that & @razylivingtheblues to realise that dream. #Dhaakad #letsbeginagain”

Arjun had tested negative for COVID-19 in April this year. He said while sharing a picture of Instagram, “My prayers for all those suffering and families for their losses. Feel truly blessed to have two tests both Negative. God has been kind. One of the main reasons I am told by doctors I recovered so fast, was because I had taken my first dose of the vaccine, thus making the viral load very low, with no symptoms.”

Last year, Arjun and his girlfriend Gabriella Demetriads were questioned by the Narcotics Control Bureau (NCB) in relation to their investigation on drug abuse in the film industry. This came after the death of Sushant Singh Rajput when his girlfriend Rhea Chakraborty was also called for interrogation by the NCB.

Policybazaar files DRHP with Sebi, aims to raise over Rs 6,000 cr via IPO

Growing concerns of vaccination for differently-abled in rural India