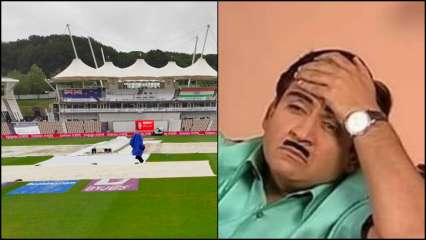 What a bummer! Just as fans were getting excited about the World Test Championship (WTC) final, the rain had to pour down, drowning all the excitement.

The Board of Control for Cricket in India (BCCI) gave an update and stated that there will be no play in the first session on Day 1.

The BCCI had earlier shared pictures from The Rose Bowl where it continues to drizzle. They captioned the image, “Good morning from Southampton. We are just over an hour away from the scheduled start of play but It continues to drizzle here. The match officials are on the field now. #WTC21”.

Update: Unfortunately there will be no play in the first session on Day 1 of the ICC World Test Championship final. #WTC21

Soon after the update was given, netizens took to Twitter and the meme feast began.

Rain wins the toss and decides to delay the match first.#INDvNZ #WTCFinal @ICC

Any important match between India Vs Newzealand exists. #ICCWTCFinal

*First session washed out due to Rain in Southampton*

Le me who was waiting for the WTC Final from more than a Month #WTCFinal #WTC21 #Rain pic.twitter.com/K8tncQhEdw

Need someone from team India to tell rain to move somewhere else like Kedar Jadhav did in 2019 World Cup. pic.twitter.com/zrFZDwyHTk

The game does have a reserve day on June 23 but in case of a no-result, the Test Championship will be shared.

India will back initiatives for peace in Afghanistan, says UNSC ambassador