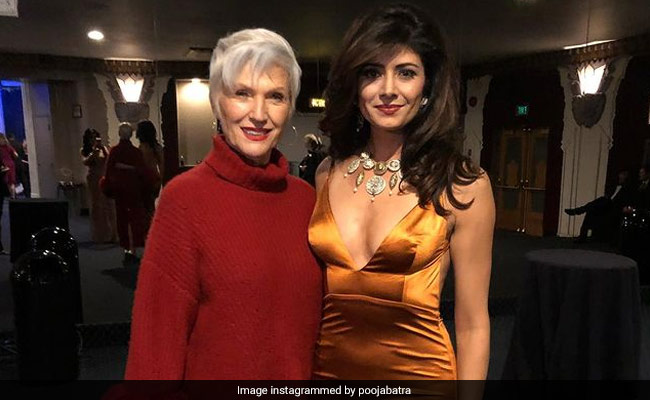 Pooja Batra with Maye Musk at an awards ceremony in 2018.

Actress Pooja Batra has shared a throwback memory from the time she met Elon Musk’s mother, Maye Musk, at an event in 2018. She took to Instagram this morning to add three pictures with Maye Musk to her ever-increasing repertoire of celebrity photographs. “With the powerhouse Maye Musk #TBT,” she wrote while sharing the pictures. #TBT can be expanded to ‘Throwback Thursday’ – a social media trend where people share old pictures on Thursdays.

The three pictures she shared on Instagram all show Pooja Batra smiling for the camera with Ms Musk at her side. While Pooja Batra opted for a copper-coloured gown, Ms Musk – who has been a model for over 50 years – dressed up in a red skirt and pullover combination. Maye Musk is mother to Elon Musk, the billionaire entrepreneur behind aerospace company SpaceX and clean energy automobile brand Tesla.

Take a look at Pooja Batra’s throwback post below:

The pictures were taken at the fourth annual CineFashion Film Awards in 2018. The ceremony was held at the Saban Theatre in Beverly Hills, California. In fact, Pooja Batra has shared a picture from this meeting earlier as well. In 2018, a few days after the awards ceremony, she had posted a picture with Maye Musk on Twitter, hailing her as an “inspiration”.

Interestingly, two years before she met his mother, Pooja Batra had hung out with Elon Musk too. At the premiere party of Season 6 of Game Of Thrones in 2016, she rubbed shoulders with not just the cast and crew of the superhit show but also Mr Musk, who was in attendance.

In February, Ms Batra had shared a picture from the party which shows her with Elon Musk.

“With the Centibillionaire, Industrial Magnate Genius who has changed our planet forever,” she wrote while sharing the picture.

Pooja Batra was crowned Femina Miss India International in 1993. She is best known for her performance in films like Kahin Pyaar Na Ho Jaaye, Nayak and Jodi No 1.

Two-Headed Snake Swallows Two Mice Simultaneously. Video Is Not For The Faint-Hearted

Time To Show Off Your Shades As #SunglassTwitter Trends

BS Yediyurappa Had Resigned On July 10, PM Modi Had His Letter: Sources