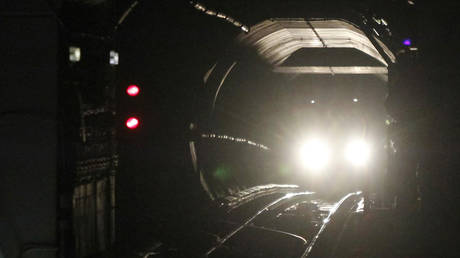 A metro train serving the US capital has partially gone off the rails in a tunnel connecting Washington, DC with Arlington National Cemetery in Virginia, stranding around 400 passengers and snarling up the evening commute.

Service between the Pentagon and Foggy Bottom was suspended on Tuesday afternoon, after a Blue Line train derailed in the Rosslyn tunnel, local media reported. Only one of the cars in the train, with 25 passengers on board, had lost contact with the rails – but that stranded the entire 12-car train, with an estimated 400 people stuck in the tunnel for over an hour.

Video from the train showed masked passengers looking at their cell phones as all the lights had gone off.

Firefighters and other emergency service personnel were deployed to the Rosslyn and Arlington Cemetery stations, with the intent to evacuate the passengers affected. They will have to walk through the tunnel, over a distance of about 650 yards (600-plus meters).

The evacuation began around 6:30 pm local time – almost 90 minutes after the derailment.