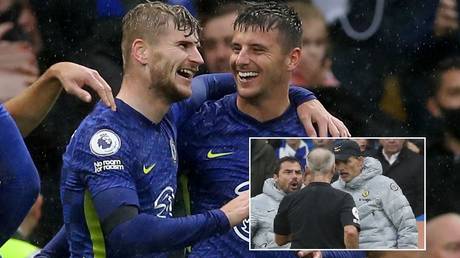 Chelsea left it late to secure three points against a stubborn Southampton side on Saturday thanks in part to a Timo Werner strike which came after he had a reported SIXTEENTH goal disallowed of his career in West London.

Chelsea boss Thomas Tuchel faced an unfamiliar feeling as he prepped his charges for battle at Stamford Bridge: pressure.

The German, who has experienced a wave of success since succeeding Frank Lampard in the hot seat last January, came into the match after a pair of losses to Manchester City and Juventus, with the tussle against Ralph Hasenhuttl’s side considered an important one to steady the ship before it risks running aground.

And judging by some of the omens he saw throughout the first 80 or so minutes of the match, the game had all the hallmarks of being ‘one of those days’.

Chelsea took an early lead when the latest academy project off their successful assembly line, Trevoh Chalobah, nodded in at the far post before the game was ten minutes old – but whispers of concern were evident in the Shed End after both Romelu Lukaku and Timo Werner both had first-half strikes ruled out.

In Werner’s case the decision seemed particularly harsh as his thundering header counted for nothing due to a foul by teammate Casar Azpilicueta committed earlier in the build-up to the goal.

The decision was contentious enough enrage Chelsea boss Tuchel on the touchline as he earned a yellow card for his protests.

Remarkably, Werner’s disallowed goal was said by ESPN and others to be the 16th such strike he has had chalked off during his Chelsea career – an incredible statistic for the German international which speaks to either his miserable luck or his uncanny ability to wander into offside positions.

VAR has ruled out a total 16 goals out for Timo Werner, at this point Werner must’ve slept with whoever created VAR’s wife because wtf😭

After the break, Southampton began to impose themselves on a hesitant Chelsea and levelled the scores through a James Ward-Prowse penalty after Ben Chilwell had brought down another former Chelsea youngster, and the Blues’ reigning Academy Player of the Year, Tino Livramento.

Saints’ skipper Ward-Prowse soon turned from hero to villain, however, after VAR ruled that a yellow card he received for a dangerous tackle on Jorginho be upgraded to red.

That was the only invitation that Chelsea needed. Buoyed by the man advantage, Tuchel implored his team to storm forward and their persistence finally paid off when Werner found himself in the right place (hint: onside) to poke home from close range with five minutes of normal time remaining.

Chilwell also made up for his earlier error by smashing home a late third to put a little daylight on the scoreboard between the two teams.

The win was an important one for Chelsea and Tuchel – but perhaps even more-so for Werner after his occasionally calamitous run leading the line for Chelsea since his big money move from RB Leipzig last summer.

“Timo Werner has now had 16 ( SIXTEEN ) goals Disallowed since Joining Chelsea,” noted one fan of Werner’s run of misfortune before his eventual goal.

“VAR has ruled out a total 16 goals out for Timo Werner, at this point Werner must’ve slept with whoever created VAR’s wife because wtf,” added another.

“Timo Werner is the unluckiest player I’ve ever seen. Sigh,” said one fan.

“Ross Barkley and Azpilicueta deserve so much credit for that goal. But thank god Timo Werner finally gets what he deserves,” wrote another.

The win lifted Chelsea to the top of the Premier League table on 16 points from their seven games played, while title rivals Liverpool and Manchester City meet in a blockbuster clash at Anfield on Sunday.

Also on rt.com
‘This may go too far’: Tuchel says he won’t force Chelsea stars to get Covid vaccine despite positive Kante case