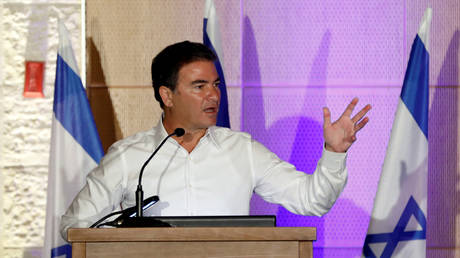 The Iranian mission to the UN has accused Israel of ‘lawlessness,’ after the newly retired head of Mossad implied that his agency had been behind an explosion at an Iranian nuclear facility and the killing of a key scientist.

The comments made by Yossi Cohen in his bombshell TV interview midweek reflected a long-running pattern of “criminal” sabotage by Israel against Tehran, Shahrokh Nazemi, a spokesman for Iran’s mission to the UN, told the AP news agency on Saturday.

“This lawlessness has reached a point when the former official of this regime is shamelessly and blatantly threatening our nuclear scientists with death,” Nazemi said, insisting that “this madness must not be tolerated.”

During his interview, Cohen, who was the director of Mossad from 2016 until last week, stated: “We say very clearly [to Iran]: we won’t let you get nuclear weapons. What don’t you understand?”


The former spymaster suggested Mossad played a role in the blast at Iran’s Natanz nuclear facility last July and the assassination of the country’s top nuclear scientist, Mohsen Fakhrizadeh, in November.

Cohen stopped short of directly confessing to both incidents, but bragged that the facility didn’t “look like it used to” after the explosion crippled its centrifuges. He also confirmed that Fakhrizadeh had been a target for intelligence-gathering by Mossad “for many years” because Israel was “most troubled” by his work.

Tehran had blamed Israel for those incidents as well as another explosion at Natanz this April.

Also on rt.com
Israel denied involvement in the killing of Iran’s general Soleimani, but a new report says it helped the US in the assassination


Nazemi insisted the Jewish state had actually been making attempts to sabotage the Iranian nuclear program for more than a decade – since a 2010 cyberattack that destroyed centrifuges to enrich uranium at the same site.

Facebook steps in to provide high-speed internet to broadband-starved rural Virginia – what could go wrong?

Afghans dying at border as tensions intensify between Taliban, Pakistan – Times of India