The Central Chess Club in Moscow is probably the most beautiful chess club in the world. The clubrooms are located in a venerable building on Gogolevsky Boulevard, whose history goes back deep into the 19th century. Many Russian noble and merchant families successively inhabited the mansion before it was forcibly transferred to state ownership after the Russian Revolution. 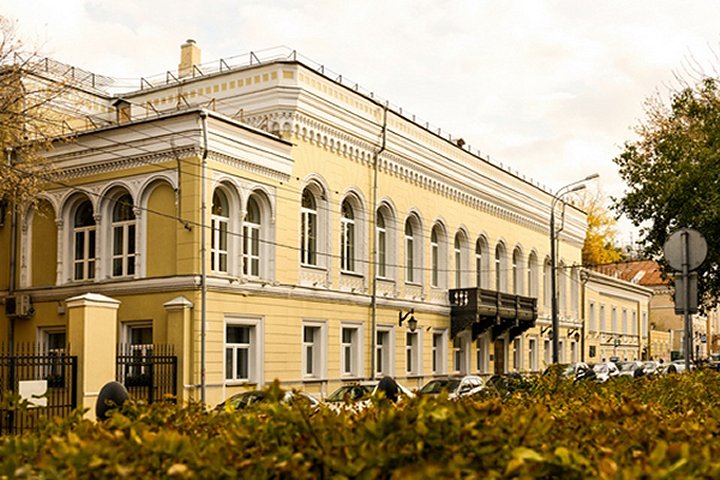 The Central Chess Club in Moscow

The Russian People’s Commissar for Justice Nikolai Krylonko then made the mansion his headquarters. Since he was the motor of the Soviet chess movement, he also brought the royal game to the historic edifice.

The history of the mansion begins in the first half of the 19th century. The property on today’s Gogolevsky Boulevard lay fallow after the Muscovites themselves set fire to their city in 1812 to deprive the French of shelter and food. In 1822, Catherine Ivanovna Grekova, wife of the boyar and first lieutenant Alexei Vasilchikov, bought the vacant lot and had two houses built there.

The couple’s son, Nikolai Vasilychikov, also became an officer in the Russian Army and was known as one of the so-called Decembrists who refused to take the oath to the new Tsar Nicholas I on 25 December 1825 (according to the Gregorian calendar) in St. Petersburg. The Decembrists protested the social conditions in the autocratic Tsarist Empire, which were characterized by serfdom, arbitrariness and censorship. The uprising was crushed. Nikolai Vasilychikov received a suspended sentence after a short imprisonment and was exiled to a unit in the Caucasus, where he took part in the wars against the Persians and Turks. He was also banned from the Russian capital, St. Petersburg, and the other major Russian cities. In 1830, Nikolai Vasilychikov was discharged from military service with honours and was allowed to return to Moscow in 1831.

In the early 1830s, the Vasilychikov family sold the estate to Countess Ekaterina Zubova. She was married to a great-grandson of the Russian general Alexander Suverov (1730-1800). Prince and Princess Zubov had the house extensively rebuilt. In 1859/1860 the two houses were finally combined into one building. Prince Serge Obolensky lived there for a while in the 1860s.

In 1865, the estate changed hands again and now belonged to the wealthy, merchant Alexeyev family. A nephew of the new owner was Konstantin Stanislavski (1863-1938), who made a name for himself as a theatre director and theorist. He was an occasional visitor to the estate. Actually, Stanislavski’s surname was also Alexeyev, but he adopted a stage name so as not to jeopardize his family’s reputation.

Twenty years later, the manor house became the property of Vladimir von Meck. He was a son of the philanthropist and music lover Nadezhda Filarétovna von Meck, who maintained an intensive pen friendship with composer Pyotr Tchaikovsky for many years.

Our experts show, using the games of Botvinnik, how to employ specific openings successfully, which model strategies are present in specific structures, how to find tactical solutions and rules for how to bring endings to a successful conclusion 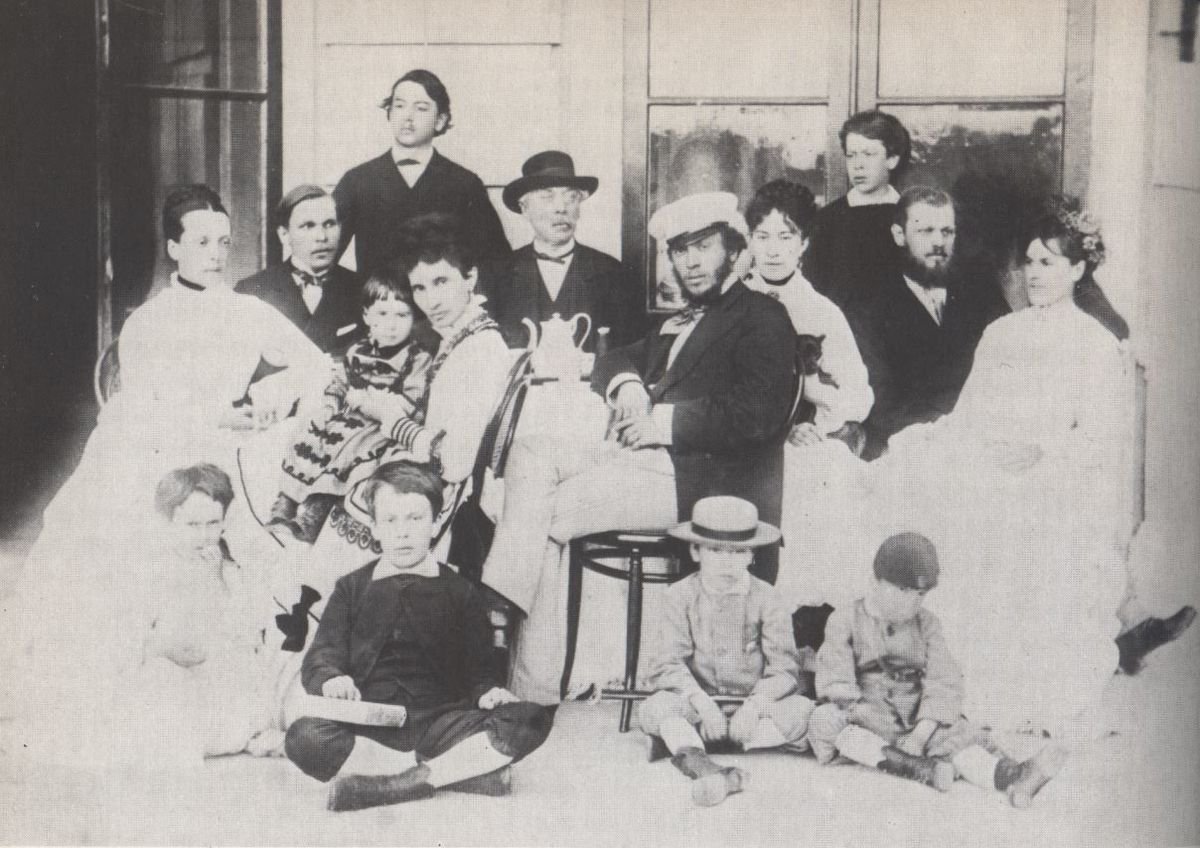 The von Meck family circa 1875. Baroness Nadezhda Filaretovna is seated on the left and holds the youngest daughter Lyudmila (Milochka) in her arms. The girl’s father was Alexander Yolshin, seated on the left, secretary to the baroness’ husband, engineer Karl von Meck (centre with dark hat). Karl von Meck only learned this much later through the second daughter Alexandra, and subsequently had a heart attack. The von Meck couple had 18 children (between 1848 and 1872), 11 of whom survived. In the centre of the photo, wearing a white hat, sits Vladimir von Meck, one of the Baroness’s favourite sons. 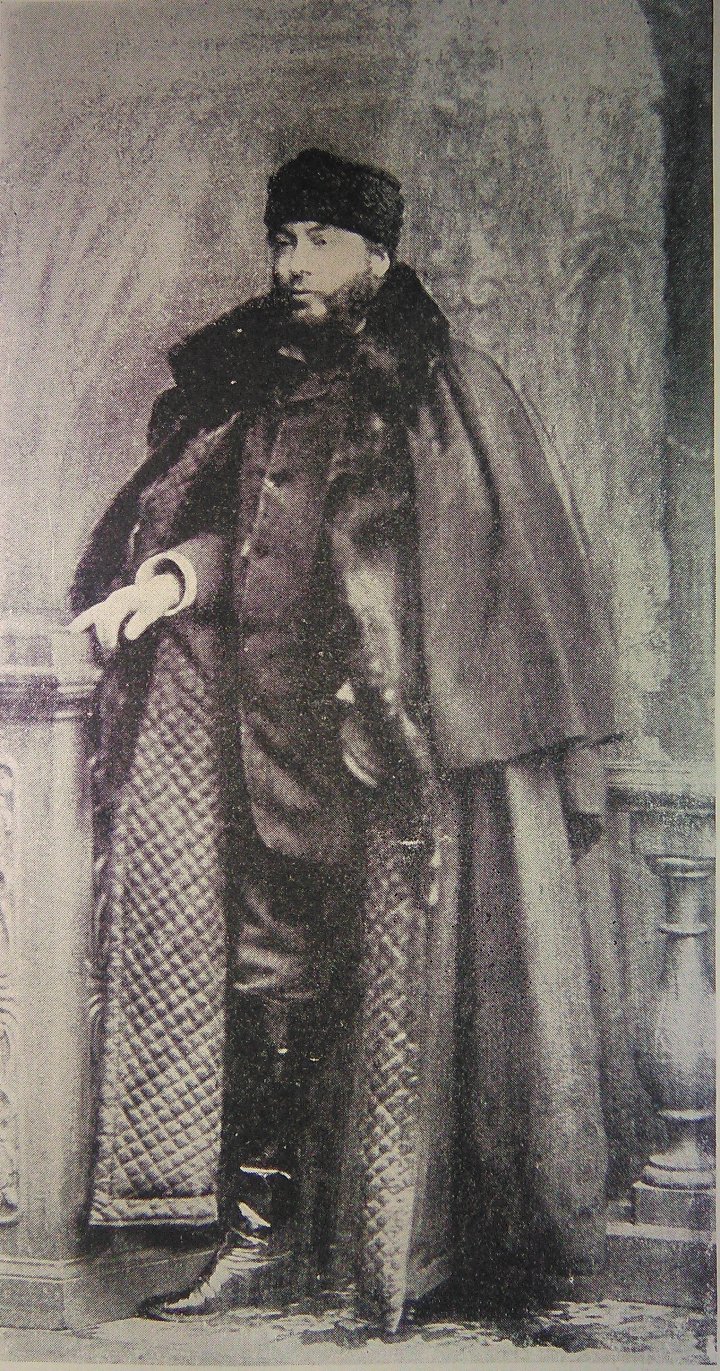 The von Meck family was of Baltic German origin and had come to great wealth in Russia as owners of railway lines. The house was owned by the von Mecks for 30 years. In 1890, Vladimir von Meck [pictured] died after a long illness.

In 1895, the house was sold to the Falz-Fein family. The Falz-Fein family came from Germany and were also successful entrepreneurs in Russia. Under its new owners, the house was equipped with balconies and was electrified. Friedrich Falz-Fein had bought the Anhalt colony of Askanija-Nova near Kherson, 100 km north of the Crimean island, and maintained a 65,000 HA farm with a huge nature reserve. Before World War I, he kept herds of horses and cattle and owned half a million sheep. He also bred over 400 species of mammals, including antelope, bison, zebra and ostrich, and undertook scientific research. After the revolution, the family members were either expelled or shot.

After only a few years, in 1899, the Falz-Feins sold their Moscow house again. The new owner was Lyubov Simina, sister of Sergei Simin, who founded the famous Simin Opera Theatre in 1903. In the 14 years of its existence, 120 operas were staged in the theatre. In 1917, it was closed as there was no longer an audience for opera after the Russian Revolution. Sergei Simin’s sister was married to opera singer Nazariy Kapitonov-Raisky, who was also a teacher at the conservatory. During this period, the Simins’ house was an epicentre for many Russian musicians. Composers Alexander Glazunov, Sergei Taneyev and Sergei Rachmaninoff as well as famous singer Feodor Chalyapin were frequent guests.

After the Russian Revolution, the house on Prechistensky Boulevard, as the street was then called — it was only renamed Gogelvsky Boulevard after Nikolai Gogol in 1924 — was nationalized and divided into several smaller flats. The former owners were assigned flat No. 4 as their new home.

In 1923, the Peoples’ Commissariat for Justice of the Russian Soviet Federative Socialist Republic (RSFSR) made the house its headquarters. Deputy People’s Commissar since 1923 was Nikolai Krylenko. In 1931, he became the People’s Commissar of Justice. In his capacity as Prosecutor General, he was responsible for countless death sentences.

Krylenko was an enthusiastic and good chess player, and was active as an organizer of tournaments and team competitions. He was the driving force behind the popularization of chess in the Soviet Union. In 1925, he organized the first major international chess tournament in the Soviet Union after the revolution in Moscow. With Nikolai Krylenko, the leadership of the not yet existing Soviet Chess Federation also moved into the mansion on Gogolevsky Boulevard.

The name Emanuel Lasker will always be linked with his incredible 27 years reign on the throne of world chess. In 1894, at the age of 25, he had already won the world title from Wilhelm Steinitz and his record number of years on the throne did not end till 1921 when Lasker had to accept the superiority of Jose Raul Capablanca. But not only had the only German world champion so far seen off all challengers for many years, he had also won the greatest tournaments of his age, sometimes with an enormous lead. The fascinating question is, how did he manage that? 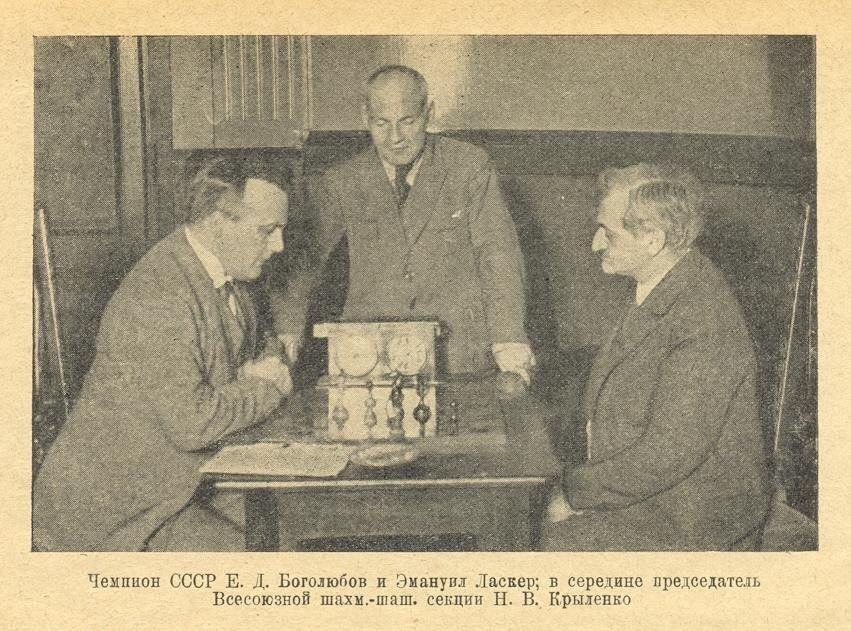 Bogoljubov and Lasker at the board, Krylenko looks on

Krylenko had brought Emanuel Lasker to Moscow after his emigration from Germany, but as more and more Russian chess players disappeared during the Stalinist “purges”, Lasker secretly packed his things together with his wife and left Moscow for New York. Krylenko was arrested in 1938 and shot after a show trial.

In the late 1920s, the mansion on Gogolevsky Boulevard was also used for a while to house communists who had been forced to flee their countries. In 1940, the state trust company “Dalstroy” had its headquarters here.

In 1956, the house, where chess had played a role since the mid-1920s, was designated as the building of the Central Chess Club at the suggestion of Vasily Smyslov. Smyslov lived near by in a skyscraper on Barrikadnaya and was friends with the chief architect of Moscow, Mikhail Posokhin.

In 1980, a chess museum was established in the mansion. In addition, the editorial office of the Russian chess magazine “64” is located there. 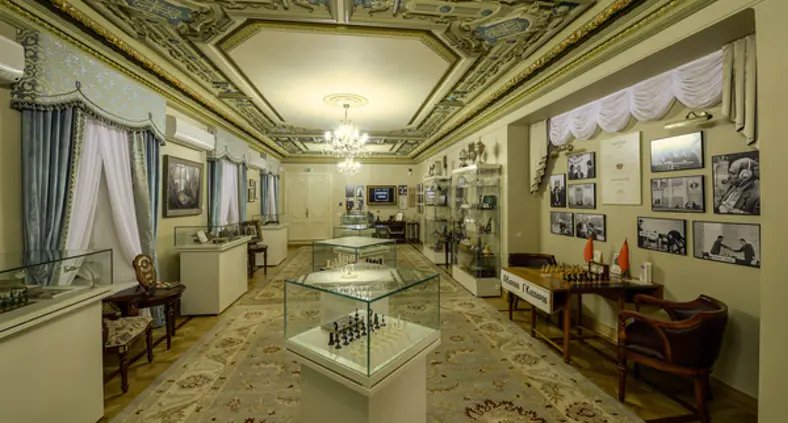 In the times of the Soviet Union and even afterwards, the rooms of the Central Chess Club were not particularly well maintained. For a long time, the building gave a somewhat run-down visual impression, typical of many old buildings in communist Russia. During a “renovation” in 1980, more was destroyed than preserved. In 2014, however, the building was restored in a historically correct and elaborate manner, and now it shines in its old splendour. 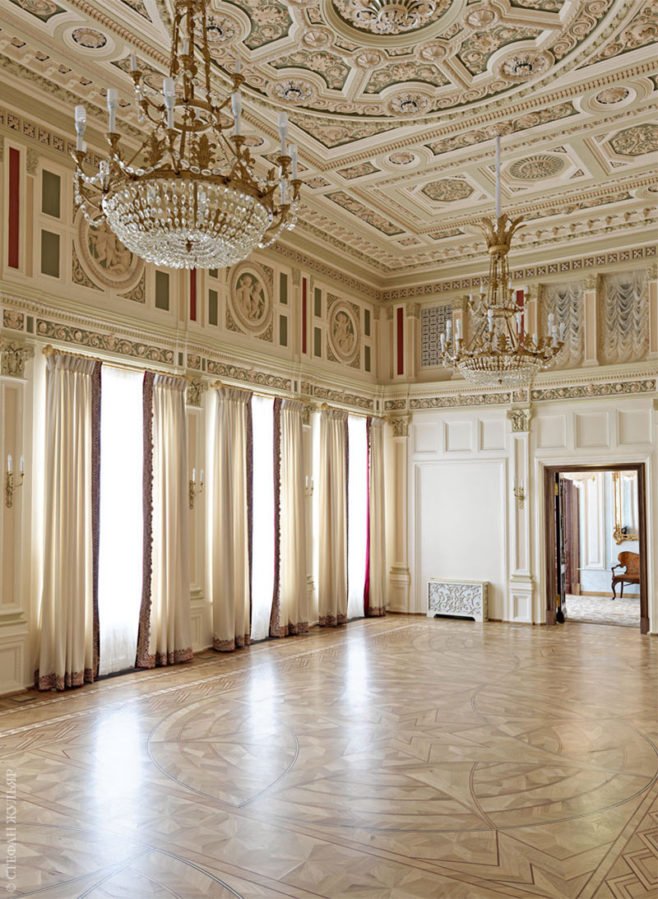 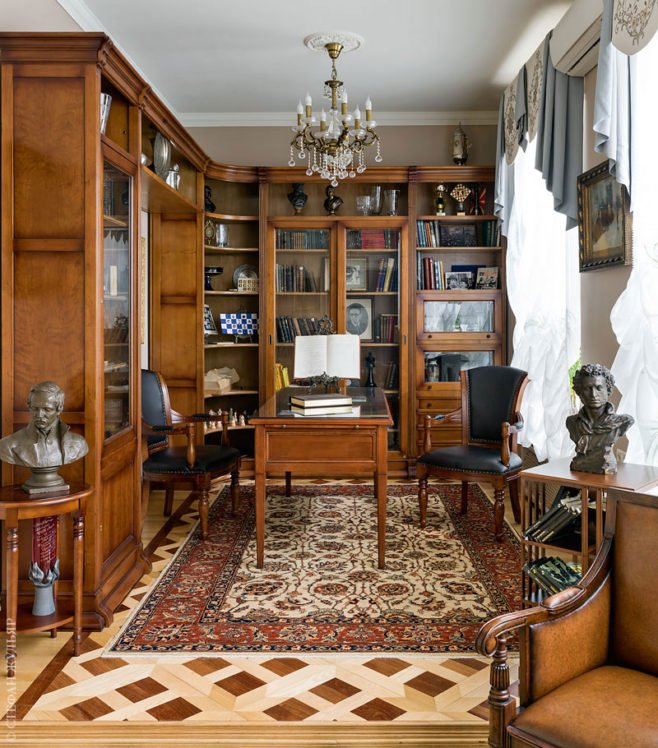 After the fall of communism, there were several attempts by investors to acquire the house to set up expensive offices or flats at the exquisite location in Moscow. But the Muscovite chess enthusiasts resisted all offers, and when necessary, an oligarch with an affinity for chess stepped in to pay dues and taxes which the club could not pay.

The Russian Chess Federation has also been using the magnificent rooms of the Central Chess Club for many years now for tournaments, ceremonial receptions and other major events.

At the #Chess Museum, the table, clocks, flags, scoresheets & adjournment envelopes from the 1984/85 Karpov-Kasparov World Championship match, which was held in the Hall of Columns in the House of Unions and, in its later stages, in the Manège. pic.twitter.com/3D075NUpKc

The Moscow Central Chess Club has now built its own website, which allows chess fans to visit the club virtually.

Understanding before Moving 49: The beginning of an attack

Zendaya’s Siblings: Meet Her 5 Brothers & Sisters From Oldest To Youngest