Down on the scoreboard, for once 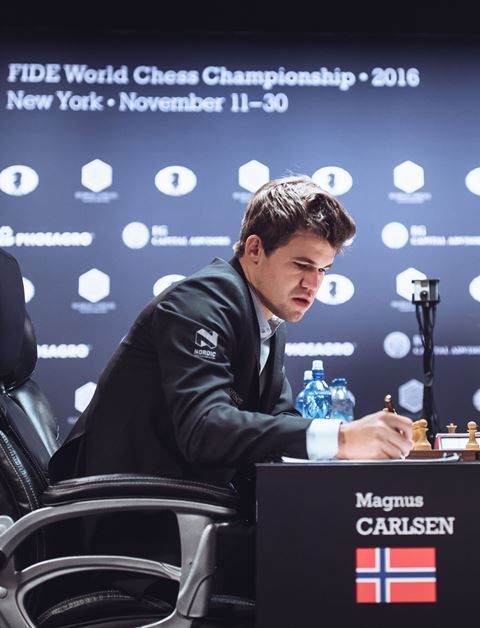 Magnus Carlsen’s third World Championship match was perhaps the most difficult. For the first time, the Norwegian needed to come back from behind, as it was his opponent who scored a win first — and he did it in game 8 (out of 12). The world champion had been struggling to make the most of his small edges against a tough defender, but in the end managed to level the score and win the deciding rapid tiebreakers.

The new challenger was Russian grandmaster Sergey Karjakin, who was born the same year as Carlsen. Karjakin openly talked about the massive investment he made during his preparation, as he received plenty of support from the Russian Federation. Given how the match went, the hard work paid off. Karjakin was more than ready to enter complex lines in the Ruy Lopez and the Italian — to name two of the systems seen during the match — against a player who by then had demonstrated that he is one of the best in the history of the game.

Qualifying to challenge Carlsen was no easy task. Karjakin reached the final round of the 2016 Candidates Tournament tied atop the standings with Fabiano Caruana. Coincidentally, the two co-leaders were paired up against each other in round 14. A draw was likely to favour Karjakin (it all depended on the Svidler vs Anand game, in that case) and the Russian had the white pieces. Caruana pushed too hard for a win and ended up losing the deciding encounter.

In the match, which took place at the Fulton Market building in the South Street Seaport in Lower Manhattan, two rather quiet draws were followed by a series of three games in which first Carlsen (games 3 and 4) and then Karjakin (game 5) failed to take advantage of small chances to score the first win of the match. As the tension rose, Karjakin’s win in a topsy-turvy eighth game prompted Carlsen to leave the press conference before it began.

Would the young champion lose his crown against an obstinate opponent? It turned out the Norwegian had the mental toughness to bounce back and eventually retain his title in the rapid playoffs. Much was said regarding the Classical World Championship being decided in accelerated time controls, with plenty of alternative solutions being suggested by pundits and aficionados. Many, however — including Karjakin — were satisfied with the format.

Below we present excerpts from an excellent recap of the games, first published on our news site in 2018. Danish grandmaster Lars Bo Hansen did a marvellous job in presenting the highlights of the hard-fought match!

Using powerful chess engines, I did a move-by-move analysis of all moves in the match. I classified a move as an “inaccuracy” if it deviated up to 0.40 from the engine’s best move at large depth; as a “mistake” for 0.40-1.00 deviation; and as a “blunder” for higher than 1.00 deviation.

In total, 625 moves were played, of which 74 moves were either Inaccuracies (I), Mistakes (M) or Blunders (B). This equates to an aggregated IMB percentage of 11.84%, distributed with 5.12% I; 4.96% M; 1.76%. No wonder it is hard to win games in a World Championship! These guys make few significant mistakes, and it is hard to get beyond the drawing margin!

Breaking down the IMBs for each player, here are the distributions in the regular games:

The bottom line is that both players made few IMBs in the games with classical time control, but with Karjakin being slightly more prone to commit more significant blunders. However, as we shall see, it was not enough to separate the two players in the 12 regular games. Most games were played on a high level. In fact, of the 12 games of the regular match, played with classical time control, five games (1, 2, 6, 11, 12) were “perfect” in the sense that neither player made even a minor inaccuracy.

After two “perfect” games, Game 3 was the first one with any IMBs, and these allowed Carlsen to obtain his first decisive advantage of the match. However, just as in the present match, the World Champion let his first chance of a win slip.

Game 4 was another narrow escape for Karjakin when Carlsen misjudged a fortress, famously stating in the ensuing press conference that “I don’t believe in fortresses”. World Champions have biases too!

After these misses, neither player obtained a winning advantage until the time scramble of Game 8, where Carlsen over-reached in his attempts to finally break through. However, this backfired and handed the Challenger his first decisive advantage of the match. But just as Carlsen in Game 3, Karjakin’s first chance beyond the drawing line was missed, and when the time control was reached, the World Champion was safely back within the drawing margin. This was not one of his better days, though, as a second blunder followed, and this time Karjakin did not falter and took the lead.

Game 8 was annotated for ChessBase by none other than Fabiano Caruana! 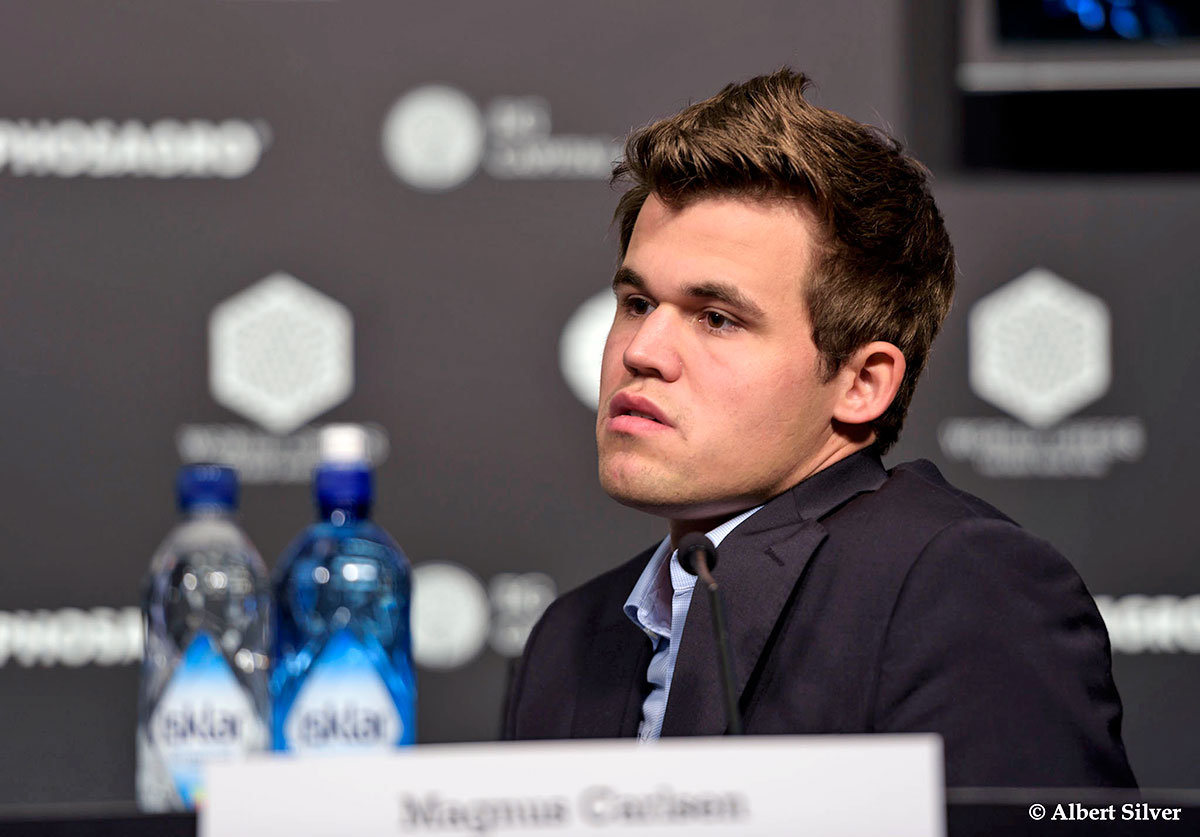 The question was how Carlsen would react. First, it was essential to survive Game 9 as Black, and then the World Champion would have two whites remaining to try to strike back. According to Kramnik, Game 9 was a very good game, especially considering the new psychological situation. Karjakin employed some pressure, but in fact the game never left the drawing margin, although it was close. The critical position arrived at move 38, just before the time control. At this juncture Carlsen, even though short on time, made a bold but risky decision with 38…Ne7. It may not have been the strongest move according to the engines, but it got him the result he was looking for!

Game 9 was also annotated for ChessBase by Caruana!

With three to go, Karjakin leads by one. Clearly, Game 10 would be critical. How should the World Champion approach this game? 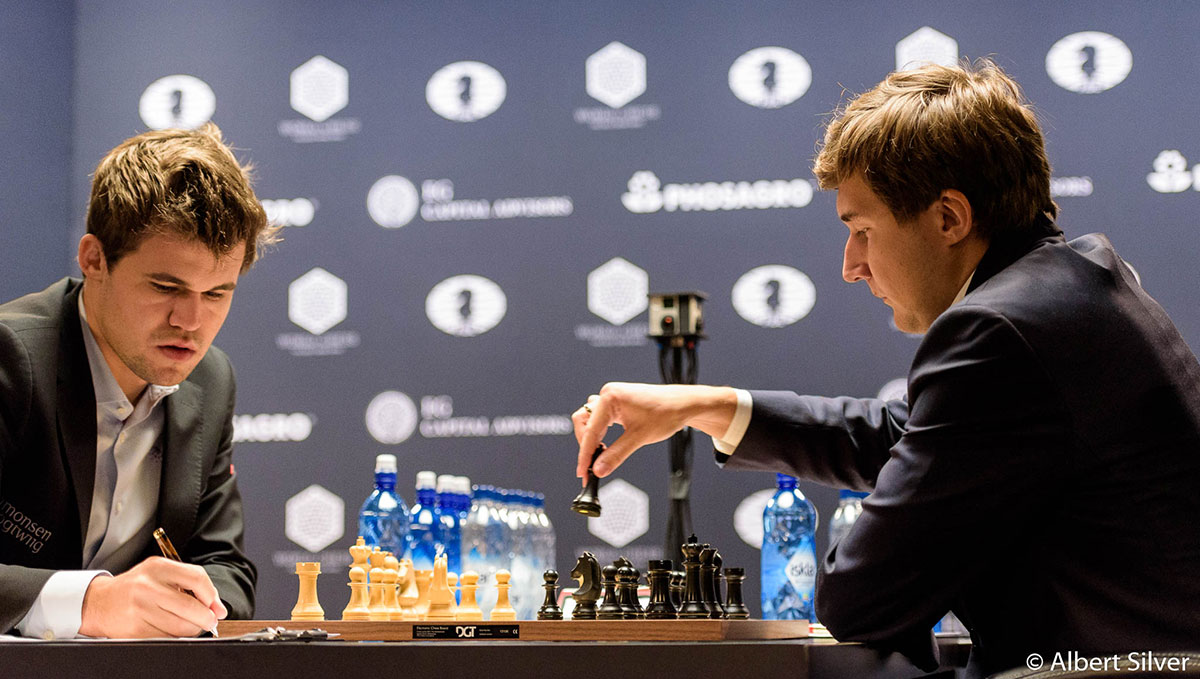 Karjakin moves in the opening phase of game 10 in 2016 | Photo: Albert Silver

He opted for a long manoeuvring game, emphasising getting a position to his liking and where he could apply pressure for a long time — without taking excessive risk. A sensible plan, but it almost fell through when Carlsen made a simple miscalculation already on move 19, giving Karjakin a chance to force a draw.

It must have been anxious moments for the World Champion, but the Challenger missed the chance and instead accepted a passive defence in a solid but slightly worse endgame. This type of position is where Carlsen is at his best, and from here he went to work to make something of his slight advantage. Recall, though, that it would take more mistakes by Karjakin to transform the game into a win, but even the best defenders have difficulty sustaining Carlsen’s relentless pressure and the continuous problems he creates. After 55 moves of tenacious defence, Karjakin finally cracked with 56…Rhh7? and committed the losing blunder that Carlsen needed.

This DVD allows you to learn from the example of one of the best players in the history of chess and from the explanations of the authors (Pelletier, Marin, Müller and Reeh) how to successfully organise your games strategically, consequently how to keep y

So with two draws in the final games. The match went into a rapid playoff. Carlsen appeared to be fine with that, as he went for a quick draw in the 12th game, even as White. As Carlsen’s coach, Peter Heine Nielsen, pointed out, is was a strategic and logical decision. If you consider yourself the better player — and who would argue against that in this case — it made sense to go for four games rather than the uncertainties of just one. 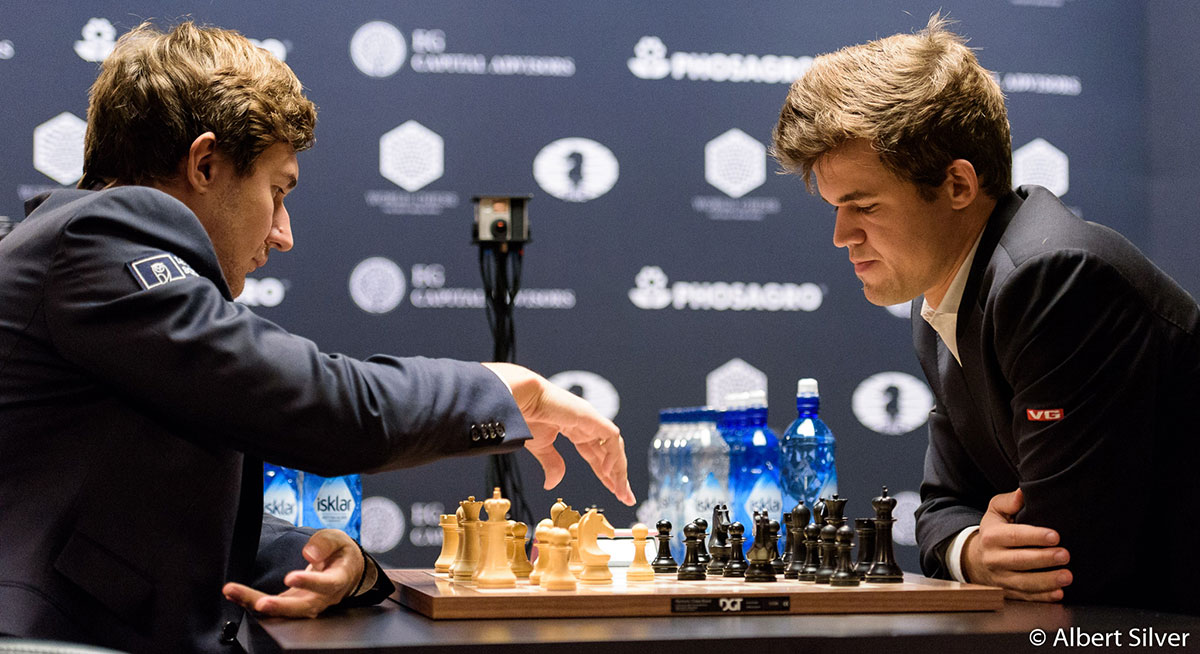 Karjakin and Carlsen during the 2016 playoff | Photo: Albert Silver

It turned out to be the right decision. Carlsen dominated the playoff and deservedly won by 3-1, even after missing several wins in Game 2. Not surprisingly, the error rate was much higher in the Playoff. The pressure and the clock take its toll. Here are the IMB stats from the Playoff: 209 total moves played and an IMB% of 29.67% (as opposed to the 11.84%) in the Classical games.

Broken down on Inaccuracies, Mistakes and Blunders respectively, we find: 8.13% I; 17.22% M; 4.31% B. Particularly Karjakin’s accuracy deteriorated markedly. Here are the stats by player in the rapid games:

No doubt Carlsen’s decision to go directly for the Rapid Playoff in Game 12 was validated. Although the time control was shorter, Karjakin had not changed his safety-first strategy. When Carlsen made a minor inaccuracy in the first rapid game, Karjakin did not really try to punish it, and the game quickly ended in a timid draw. The difference in willingness to make some bold decisions was evident also in the rapid games and may eventually have led to Karjakin’s downfall in the match.

Conversely, Game 2 was a thriller, when after committing a major misjudgment early on, Karjakin displayed the same tenacity as in the regular match and managed to hang on to a draw with little time left, when Carlsen missed three clear wins in the endgame.

Despite the disappointment of not winning this game, the World Champion was ready for the third rapid game and scored a dominant win. It is interesting to compare the perspective of human Grandmasters to the cold cynical evaluations of the analysis engines. Where the human Grandmasters see a dominant performance by the World Champion, culminating in a brilliant positional pawn sacrifice, the analysis engines simply state that Karjakin could have held the position in equilibrium until just a few moves before the end. I agree with my Grandmaster colleagues here, and with Anish Giri’s apt comment in New In Chess:

And this gorgeous position is not even objectively better for Black [according to the engines], but this is one of those moments when as an annotator you have to pull yourself together, overrule AI and just claim that Black is dominating.

In a real game, no human would be able to hold on.

When it comes to strategy, one of the key things that chess professionals understand much better than amateur players is the role of the bishop which is the key theme on this video course.

A brilliant win by Carlsen. Karjakin had one last chance, but as Black against Carlsen in a must-win situation is an unenviable task. The Challenger tried the Sicilian to create some play, but Carlsen kept the position under control and concluded the game and match with a worthy queen sacrifice to force mate.

All examples from the 2016 match

The match was extensively covered in ChessBase Magazine 176