Three players in the chasing pack

Almost half the field (5 out of 12 players) in the open section of the Russian Superfinals have an Elo that falls within the 2700-2728 rating band. The top seed is Dmitry Andreikin, who won the national championship in 2012 and 2018. An extremely dangerous (and at times underrated) player, Andreikin took down early leader Kirill Alekseenko in round 4.

By this point it was apparent that Andreikin, playing white, was better prepared in this line. Only on move 15 did Alekseenko play a novelty, but he had already spent around 10 minutes deciding on which move to play four times in the game. The previous encounters that had entered this line all favoured white.

Here Andreikin had just found the strong 16.Nf5, and after 16…Nf8 there came 17.e4 opening up the d1-h5 diagonal for the queen.

There followed 17…Ng6 18.Qh5 dxe4 19.Bxe4 and here Black, already in deep trouble, played 19…Re6, the decisive mistake. White has enough firepower on the kingside to break through with 20.Nxh6+

20…gxh6 21.Bxg6 Qxd4+ and Alekseenko resigned after 22.Rf2. Black’s rook and bishop on the queenside are mere spectators — there is no way to stop White’s attack. 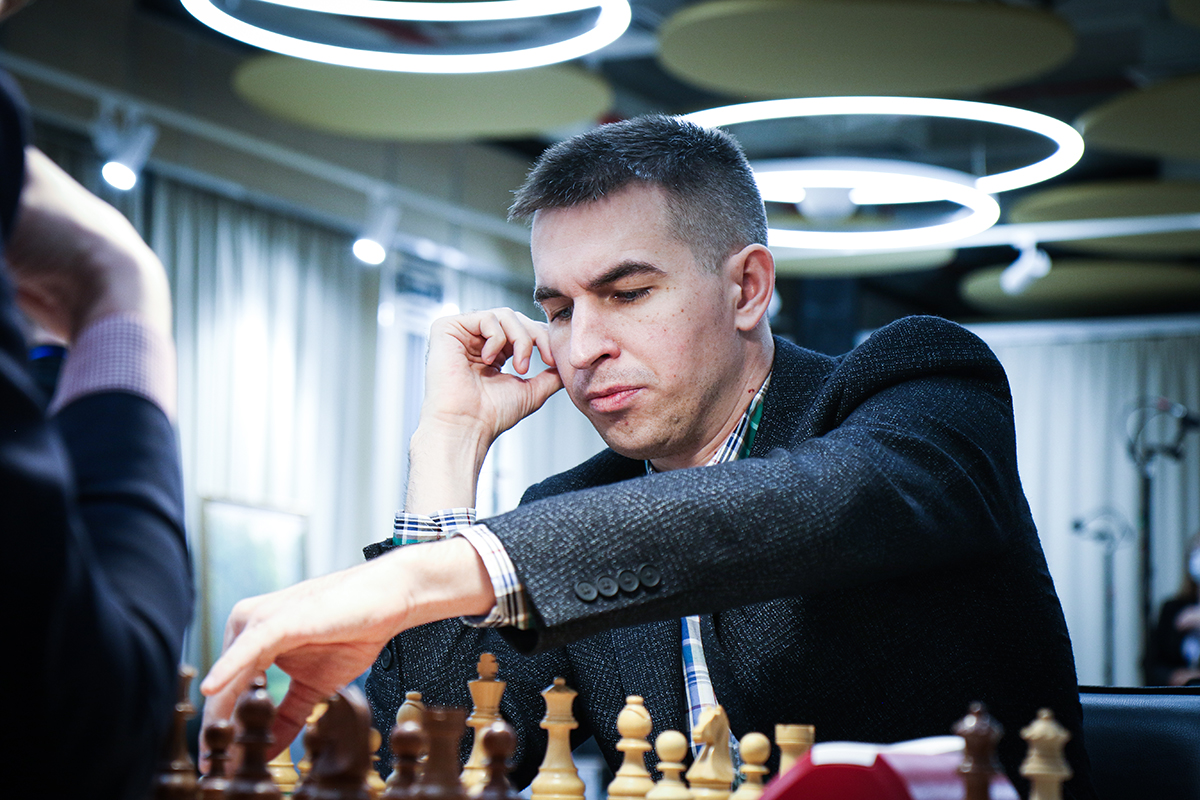 Since the sole leader had been defeated, four players climbed to the shared lead on +1. In the fifth round, however, second seed Nikita Vitiugov defeated Andreikin to go into round 6 alone at the top of the standings table.

This DVD provides everything you need to know to be able to play one of the most classical openings with Black, the Nimzo-Indian, arising after 1.d4 Nf6 2.c4 e6 3.Nc3 Bb4. Nearly every World Championship and top tournament features the Nimzo-Indian.

Out of a Nimzo-Indian, the players deviated from theory early on and entered a sharp position: White gave up the exchange and a pawn in order to wreak Black’s pawn structure and get a strong initiative.

In the diagram above, Black needs to be extremely careful to keep the balance. The correct defensive move here is 23…Rd8, as after Andreikin’s 23…Qd8 there followed 24.Qxf6+ Kg8, and the knight joined the attack with the strong 25.Nd6 (notice that this would not have been possible with a rook on d8, as the black queen also protects that square from b8).

The knight jump not only creates direct threats but also clears the way for the light-squared bishop. Andreikin immediately gave back material, but precise play by Vitiugov resulted in a very nice 38-move victory.

With six rounds to go, Vitiugov is in the sole lead with a 3½/5 score, followed by a dangerous chasing pack standing a half point back — Alekseenko, Vladimir Fedoseev and Maxim Matlakov have collected 3 points so far in the event. 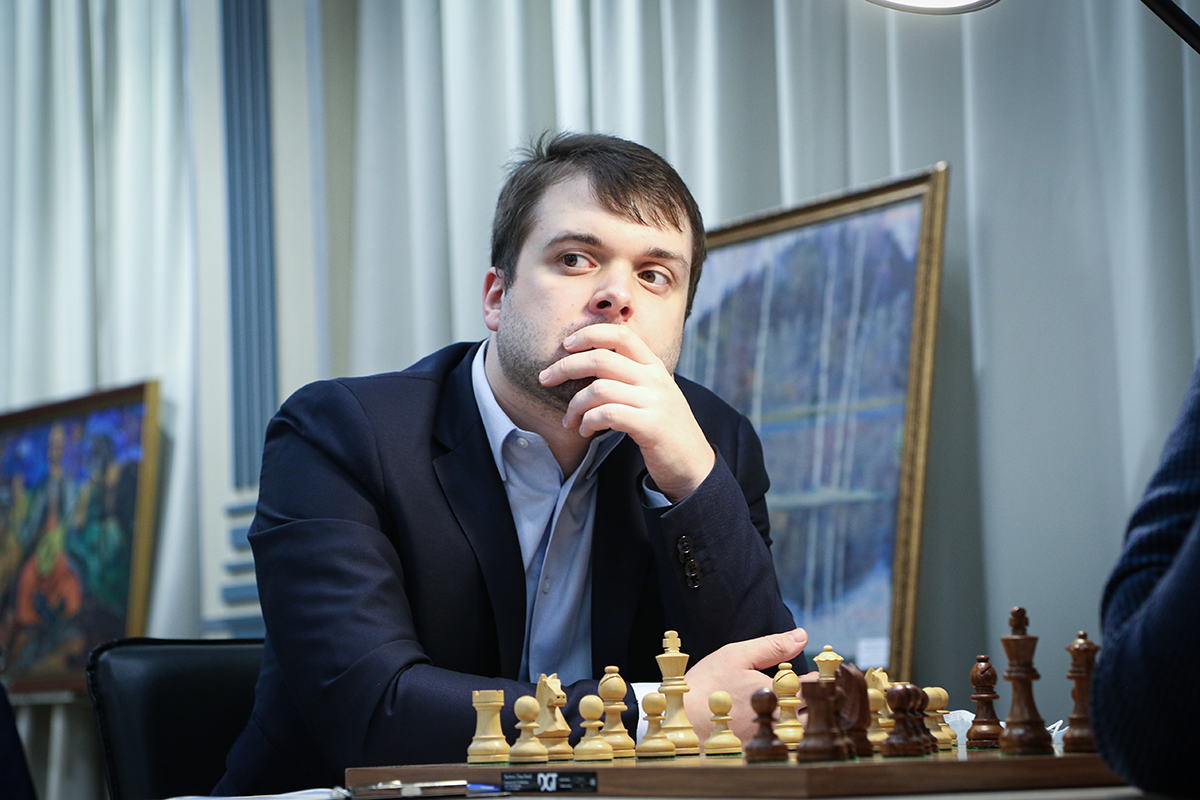 Back-to-back victories for experienced IM Evgenija Ovod allowed her to join Valentina Gunina in the lead of the Women’s Superfinal. Ovod beat Daria Voit and Marina Guseva in long battles (76 and 89 moves respectively), while Gunina kept up the pace by beating Alina Bivol in yet another sharp struggle.

On this DVD Dorian Rogozenco, Mihail Marin, Oliver Reeh and Karsten Müller present the 8. World Chess Champion in video lessons: his openings, his understanding of chess strategy, his artful endgame play, and finally his immortal combinations.

With both kings exposed on the open position, it is all about the initiative here. By this point, the engine already gives Black a large advantage, and Gunina is not one to miss the chance to show off her tactical prowess in such situations — there followed 34…c3, of course! 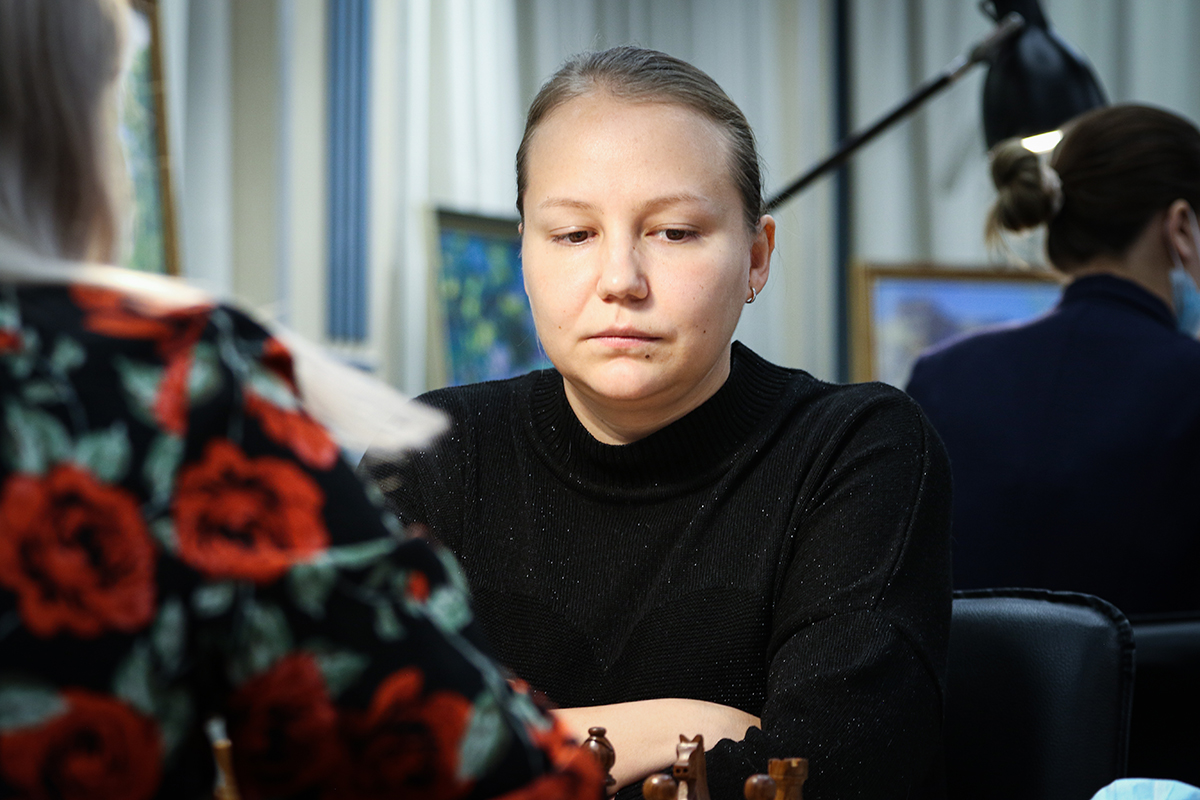