The second match of the 2021 Speed Chess Championship Main Event went down to the wire as GM Ding Liren and GM Shakhriyar Mamedyarov fought a hotly contested battle. The Chinese GM ultimately won with a final score of 14-12 (an identical result to the first match). Ding prevailed with a 5-4 score in both the 5+1 and 3+1 segments and commanded a healthy two-point lead going into the 1+1 bullet segment. However, Mamedyarov fought grittily until the end, making it a memorable match, one that was decided only in the final minute.

Ding now advances to the quarterfinals and will face the winner of the match between GMs Levon Aronian and Daniil Dubov, which will be played on November 11.

The games of the 2021 Speed Chess Championship Main Event are played on the Chess.com live server. They are also available on our platform for watching live games at Chess.com/events and on our apps under “Watch.” Expert commentary can be enjoyed at Chess.com/tv. 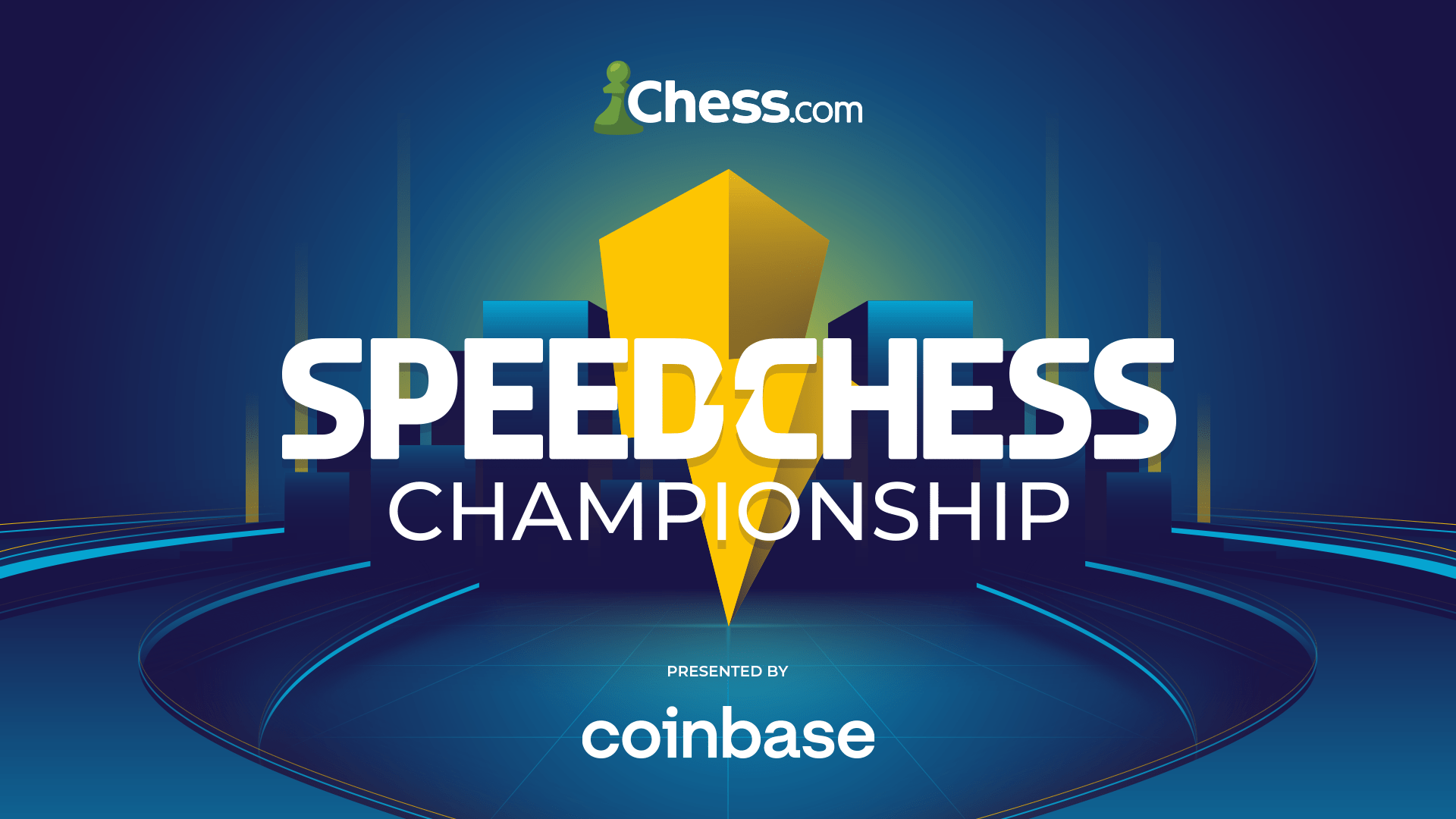 Both commentators on the Chess.com broadcast closely followed the ensuing battle. Birthday boy and commentator GM Daniel Naroditsky exclaimed at one point, “Such a close match, back and forth they go!”, while commentator GM Robert Hess summed up the Azeri grandmaster’s fighting spirit with, “Mamedyarov is ready for all sorts of battles.” Both these sentiments effectively described the course of this close match, considering the way it unfolded.

The live broadcast of the match.

Pre-match predictions by the commentators seemed to lean toward Mamedyarov, an active and experienced blitz player, whereas Ding’s credentials were not really established in this format, despite his being world #2 in classical chess. Pre-match win probabilities were boldly mentioned as 53% – 47% in favor of Mamedyarov.

Both Ding and Mamedyarov looked rusty in the initial games, especially when they lost a game each—in the first and fourth games—by running out of time even when their positions looked defensible. Ding lost the second game of the segment due to a mouse slip when he hung his rook for free, though his position was already lost.

The sixth game of the segment was the first full-fledged clash of the match, not only for its fighting content but also for curious queen movements by both players. Mamedyarov’s unorthodox handling of the opening featured three queen moves in the initial seven moves of the game. In return, Ding maneuvered his queen to the g8 square, where it was hemmed in by his own pawns and pieces. When the queen returned to action on the 38th move, he was already winning.

Once both the contestants warmed up to the format, game eight produced a magnificent fight, reminding the spectators that such world-class players can play high-quality games even under fast time controls. Ding played the opening confidently with the black pieces, trading regularly and reaching an equal-looking ending by move 25. But here’s when Mamedyarov showed his fighting qualities, refusing to accept the so-called limitations of the knight over bishop in an open position, and relentlessly pressing for an advantage in the endgame:

With this excellent effort, Mamedyarov equalized the score at 4-4, and it looked like he was sailing on favorable winds. That’s when Ding showed his class:

What a marvelous battle! This was the final game of the 5+1 segment, and Ding deservedly took the lead with a 5-4 score. At this point, his ‘Live Odds’ for winning the match rose to 51%-49%, justifiably.

The most exciting phase of the match, where the players scored five wins handling the black pieces. The first instance of brilliance came from Ding, who showed excellent and unconventional judgment in allowing his opponent to double his pawns.

The best-played game of this segment was the ninth and last game, which was a tactical delight for the spectators. Facing an attack on his king, Mamedyarov with white pieces, looked like he was staging an impressive counter-attack on the opponent’s king, when it turned out that Ding had evaluated the position in greater depth.

With this win, Ding seemed to inch toward winning the match, even though the ‘Live Odds’ remained unchanged, still 51%-49% against him. After all, who could predict the upcoming Bullet segment?!

Even though he lost the very first game of the segment, Mamedyarov scored a remarkable comeback in the match when he scored crucial wins in the fourth and sixth games. The latter was a delightful tactical melee; how many times would we get to see a white bishop entrenched on the h7-square!?

After this topsy-turvy win, now leading the segment with 2.5-1.5, Mamedyarov got his opportunity for a comeback. He had to score at least one win in the two remaining games to tie the overall score. But what the spectators witnessed was more drama.

With such an escape, it looked as if Mamedyarov indeed had good fortunes on his side, but the final game was an anti-climax. Ding coolly defended with the black pieces to preserve equality and even scored a win when Mamedyarov threw caution to the winds in his quest to win the game.

In the post-game interview, Mamedyarov recognized that in most of the matches he lost in his career, the final game always proved to be the crucial one. But he also admired Ding’s play, admitting, “He played [a] little bit better than me. I tried to play a different opening in every game, and Ding seemed to [get] a better position in every game!” 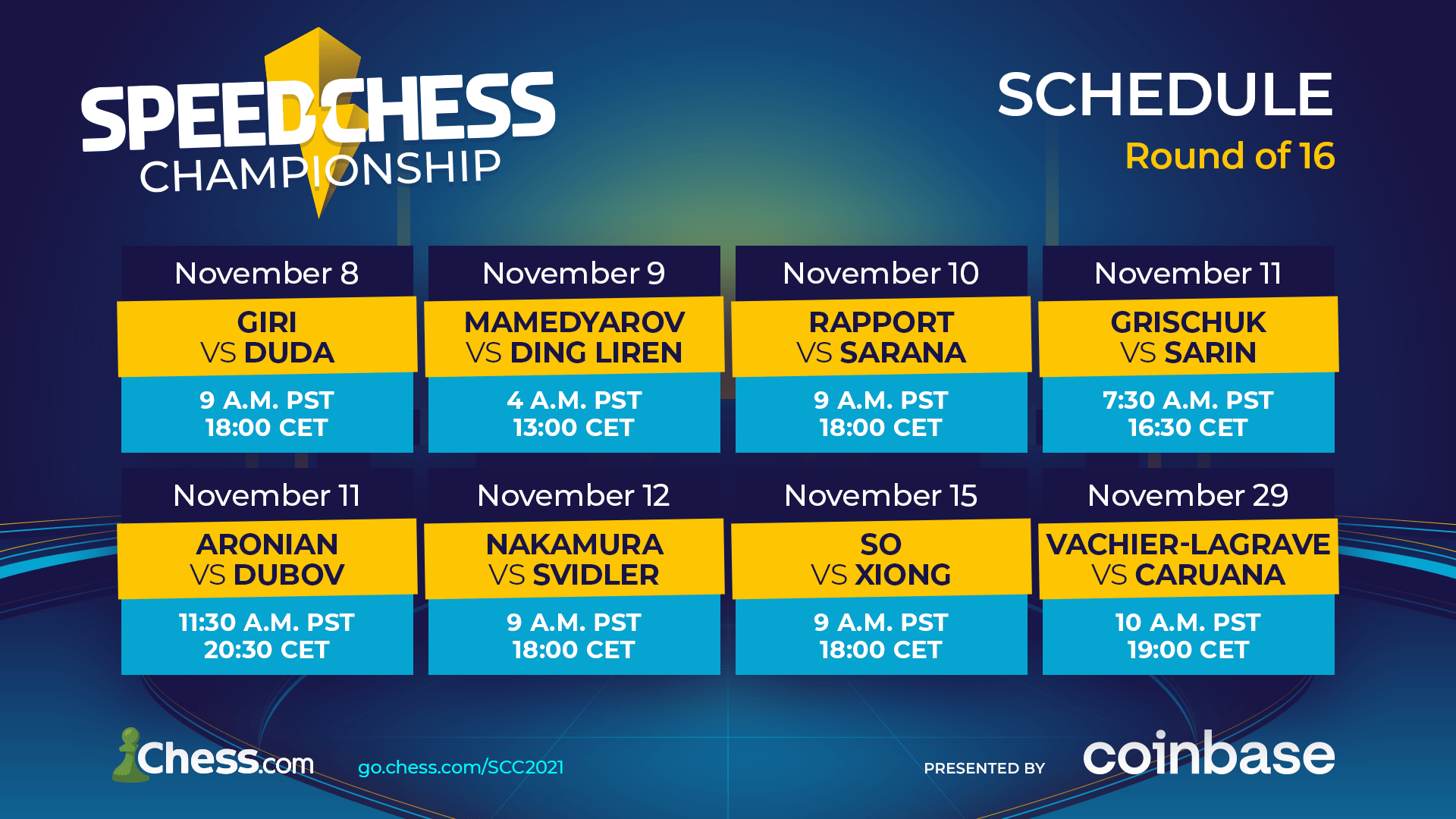 The 2021 Speed Chess Championship Main Event is a knockout tournament among 16 of the best grandmasters in the world who will play for a $100,000 prize fund. The tournament will run November 8-December 19, 2021 on Chess.com. Each individual match will feature 90 minutes of 5+1 blitz, 60 minutes of 3+1 blitz, and 30 minutes of 1+1 bullet chess.

Find all information about the Speed Chess Championship here.