GM Hikaru Nakamura won the rapid stage of the Saint Louis tournament on the strength of his two wins on the last day. Nakamura goes into the blitz portion of the event a point ahead of GMs Fabiano Caruana and Richard Rapport, as the latter matched him with 2.5 out of 3 on Friday. GM Jeffery Xiong also won two games to climb out of the cellar.

How to watch?
The games of the Saint Louis Rapid & Blitz can be found here as part of our live events platform. Daily commentary is available on Chess.com/tv starting at 1:00 p.m. Pacific / 22:00 Central Europe. 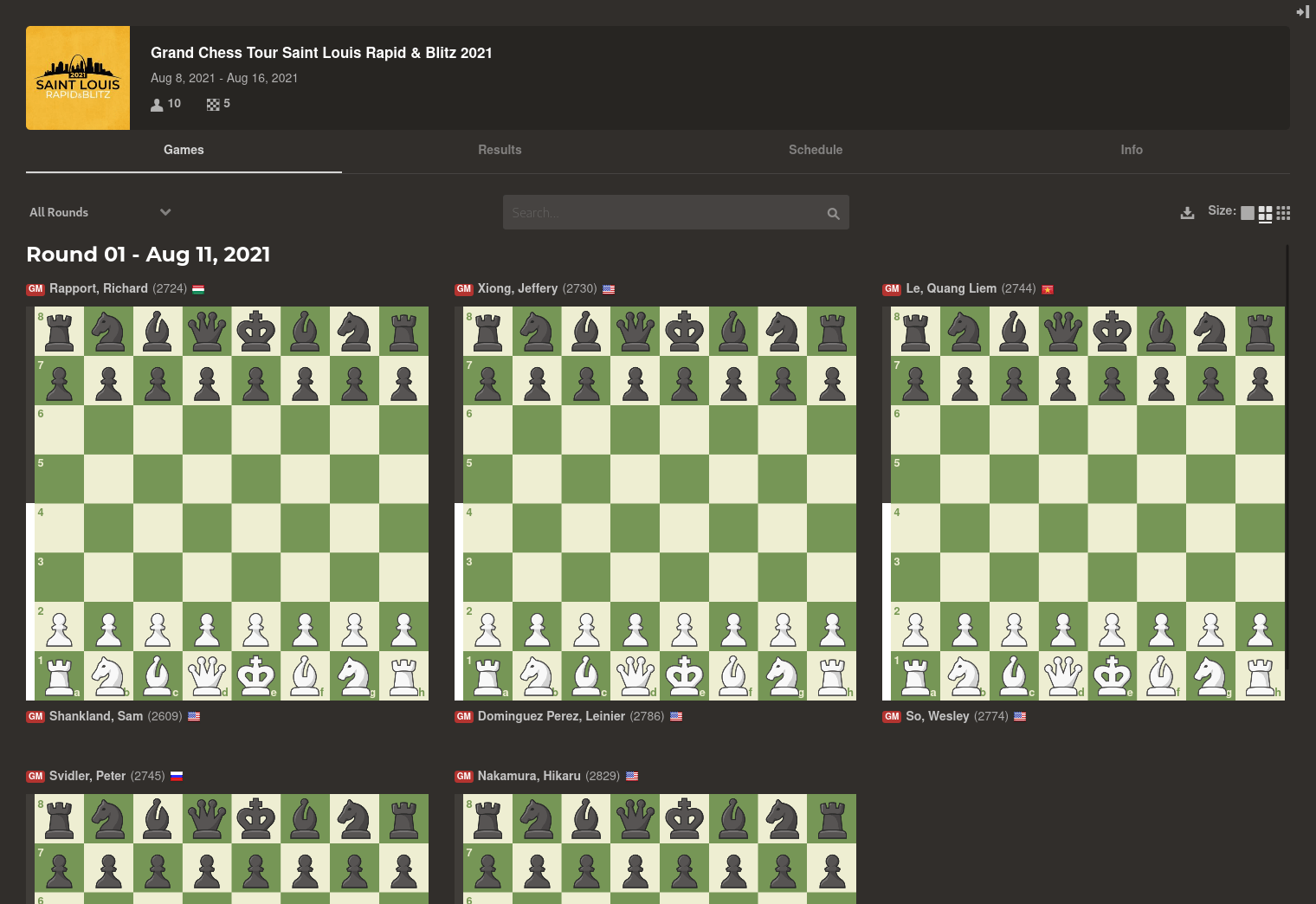 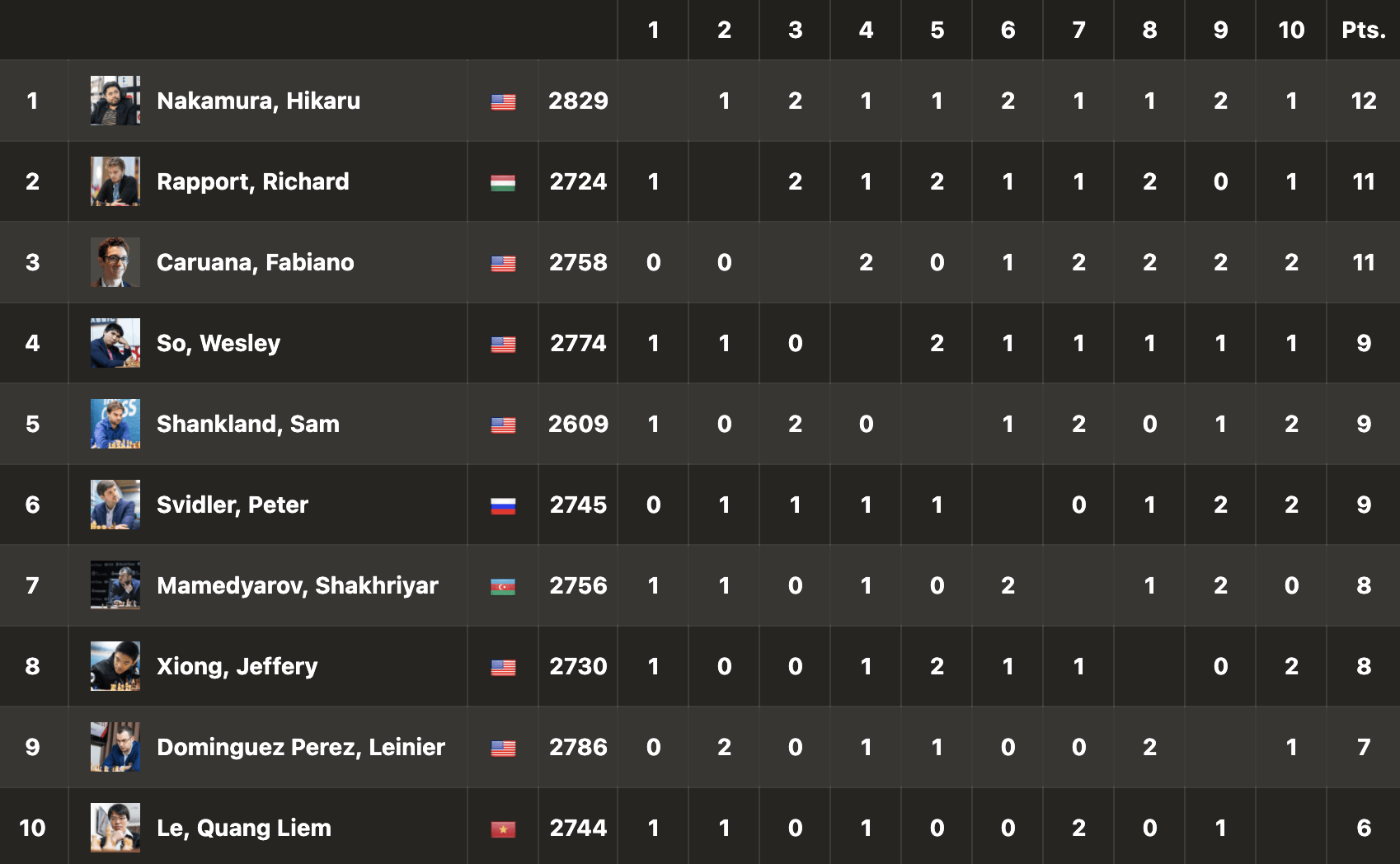 At the start of Round 7, our attention mainly was divided between Caruana’s and Nakamura’s games, but the sharp opening between GMs Shakhriyar Mamedyarov and Wesley So stole the show. The Vienna Variation is very well researched and many times tested in tournament practice, however, Wesley’s choice on move 6 took the game into a less explored territory.

It seemed that Shakh got the better out of middlegame complications, but his extra pawn proved to be very difficult to convert against Wesley’s ingenious defense. The draw was agreed when the players ran out of pieces and pawns.

As commentator IM Danny Rensch pointed out, no one knows the white side of Open Sicilians better than Caruana. In that sense, it felt a bit unfair for Rapport to be dragged into a Scheveningen formation instead of his planned Paulsen. Fabi’s clever 7.Ndb5 was the key to winning the opening battle, and soon the white pawns started their march toward the black king’s shelter. For a long time, Caruana had a won game, but then something incredible happened.

This might seem like a fluke win, but credit goes where credit is due: Richard never gave up. By the way, Rapport is having an interesting tournament, because his best games came with Black!

Nakamura’s opening preparation fully paid off as he was able to land his first body blow before his opponent, GM Lenier Dominguez, was even able to complete his development. I don’t know if 6…Nc6 was the most accurate move order, as it certainly invited 10.d5! Dominguez had to spend a lot of time to avoid immediate disaster, only to end up in a difficult endgame down a pawn and way down on the clock. Nakamura finished the game in style to earn an important victory.

GM Sam Shankland did a tremendous job yesterday, coming back to even his score after a bad Day 1. Such feats from now on should be labeled Shank’s Redemption. Sam clearly showed his intention to play every game for a win, and having Black against GM Peter Svidler didn’t make him any less determined.

A rare line of the Rossolimo took the game into a Maroczy bind structure, where Black always welcomes a trade of light square bishops. Danny made an important observation that the key break b7-b5 couldn’t be stopped. The ensuing complications were reasonably well handled by both players, and the draw seemed a fair result.

The first game to finish was GM Le Quang Liem versus Xiong. The Vietnamese grandmaster played a sideline of the Advance Variation against Jeffery’s Caro-Kann. Amazingly, this same thing already happened between these two, only the colors were reversed!

The most important development was Nakamura’s catching up with Caruana, but also Rapport’s win that vaulted him into third place. With two more games to go, the tournament intrigue tightened up to the max.

First, it was Rapport who got the job done by outlasting Xiong in a tactical melee with both players low on time. Perhaps, the game took a wrong turn for Jeffery when he couldn’t figure out the best way to sacrifice the exchange on move 21. Once again, Richard’s inventive style of play and great fighting qualities deserve the utmost praise.

In an event that already featured many comebacks, wasn’t Wesley So due for one of his own? In Round 8 he had the white pieces against Nakamura, and it was another Nimzo. The line chosen by Wesley has a solid reputation, but it’s not known for bringing White quick success. Hikaru had to patiently defend his isolated queen pawn, and as expected, he was the man for the job. Wesley gave it his best shot, but by move 30 he was running out of time. A bit of time scramble in the R+N for both sides endgame didn’t upset the balance – draw.

Caruana is double-dangerous after he loses a game. In his battle with a fellow top-10 player, Mamedyarov, Fabi obtained the advantage of the bishop pair early, which pleased our guest commentator GM Jon Ludvig Hammer, who recently released an instructional video on the subject. The finish of this game will open up a grand parade of endgame technique displays from Round 8.

Shankland-Le started off as a quiet version of what might be called the English Catalan because the white pawn didn’t get to d4 until move 21. Maybe it should have never been allowed to reach that square, as Liem had a good option 17…Bxf3 18.Bxf3 c4, nailing it down for good. As the game went, he quickly lost his pawn on the queenside and had to be content with a hard defensive task. It all came to a head after 40 moves of play.

Dominguez-Svidler saw White winning a pawn in the early going, but the conversion process was aggravated by Lenier’s customary time trouble. He took a bit too much time on capturing the pawn on g7, and the game suddenly became sharp. I invite you to see the end of this dramatic game.

So, it all came down to the last round, when the two leaders met. Naturally, the Nakamura-Caruana game lived up to the billing. I’d like to leave the analysis of this great battle in the capable hands of GM Dejan Bojkov.

A great win by Hikaru gave him the top spot in the rapid stage. Knowing his skills in fast time controls it’ll be hard to bet against his overall success in Saint Louis.

Closely following Hikaru are Caruana and Rapport. The latter easily survived a theoretical battle against Mamedyarov, who decided to check his opponent’s knowledge in the old 7.d5!? sacrificial line of the Queens Indian Defense. The first independent move was 16.Nd2, but it didn’t change the existing assessment of the position as equal. Shakh decided against tempting his fate and delivered a perpetual check at the first opportunity.

One last piece of the drama was delivered in the battle between two American wild-cards. Jeffery Xiong and Sam Shankland put up quite a show.

Both Svidler-So and Liem-Dominguez ended up drawn after reasonable play. Shakhriyar and Wesley keep their hopes alive for the blitz portion of the event coming on Saturday and Sunday.

Disaster on the diagonal