The wholesale price inflation rate jumped to a five-month high of 12.54 per cent in October, a festival period, against 10.66 per cent in September as the rate of price rise in raw materials showed an upswing.


As demand is recovering, industry is likely to pass on the higher costs to consumers and this may affect retail price inflation, experts said.


This could partly be attributed to the higher weighting of primary food items in the consumer price index (CPI) than in the wholesale price index (WPI). Food items have more than a 47.25 per cent weighting in the CPI and only 15.26 per cent in the WPI.


The rate of fall in vegetable prices declined to 18.49 per cent from 32.45 per cent. ICRA Chief Economist Aditi Nayar said there was a month-on-month rise in the vegetable index and the early data for November suggested a continuance of the rise in prices of vegetables such as potato, tomato and onion, which will weigh against a seasonal moderation in the food index for the current month.


CARE Ratings Chief Economist Madan Sabnavis said a favourable statistical base had masked the increase in prices of food items.


Fuel and power saw the inflation rate rising to 37.18 per cent from 24.81 per cent over this period. Nayar partly attributed this to issues related to coal availability, which led to spike in electricity prices.


Sunil K Sinha, principal economist, India Ratings, said with the coal shortage abating, an unexpected spurt in spot electricity prices was expected to moderate in the near term. 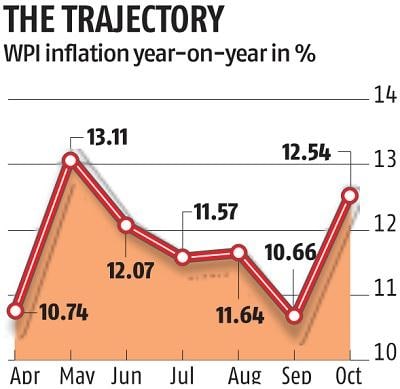 
D R E Reddy, chief executive officer and managing partner, CRCL LLP, said the rise in the WPI was cause for concern because industry might pass it off to the consumer.


Besides, inflation in petrol climbed to 64.72 per cent from 54.85 per cent and that in diesel to 64.72 per cent from 54.85 per cent. However, the Centre’s move to cut excise duty on petrol by Rs 5 a litre and on diesel by Rs 10 a litre from November four would pull down this inflation now, depending on global oil prices. As many as 25 states have also cut value added taxes on these two fuels which would further dampen inflation.


However, Sinha said with Brent crude breaching the $82/barrel mark in the international markets, fuel inflation is unlikely to provide any breather going forward.


Sabnavis said volatility in the international crude oil prices could also weigh on the overall wholesale inflation in the near term. He said recovery in global demand and supply disruptions have been pushing up prices of raw materials including metals, plastics and electrical components.


Nayar said,” With demand reviving, we expect producers to start passing through higher input and freight costs, even as the tax cuts on fuels will offer them a breather.”

Decision on booster dose will be based on scientific evidence: Mandaviya