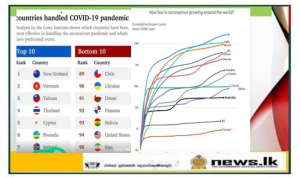 New analysis has found that New Zealand has handled the coronavirus pandemic more effectively than any other country in the world.

Australian think tank the Lowy Institute has crunched reams of data to produce a new interactive that assesses the coronavirus response of almost 100 nations.

Researchers tracked COVID-19 case numbers in each country, as well as confirmed deaths and testing rates.

While New Zealand took  top spot, it was closely followed by Vietnam, Taiwan, and Thailand, which were ranked second, third and fourth, respectively.

Australia also performed strongly and was ranked eighth in the world by the Lowy Institute.

The United States has been ravaged by the pandemic and languishes near the bottom of the table, at number 94. Indonesia and India did not perform much better, sitting at numbers 85 and 86, respectively.

Lowy did not rate China’s response to the pandemic, citing a lack of publicly available testing data.

SLPC chairman among those who shared fake news of JVP leader!

Could Cincinnati Shake Up the College Football Playoff Field?

YouTube, TikTok And Snap Will Have To Testify Before Congress Over Kids Safety