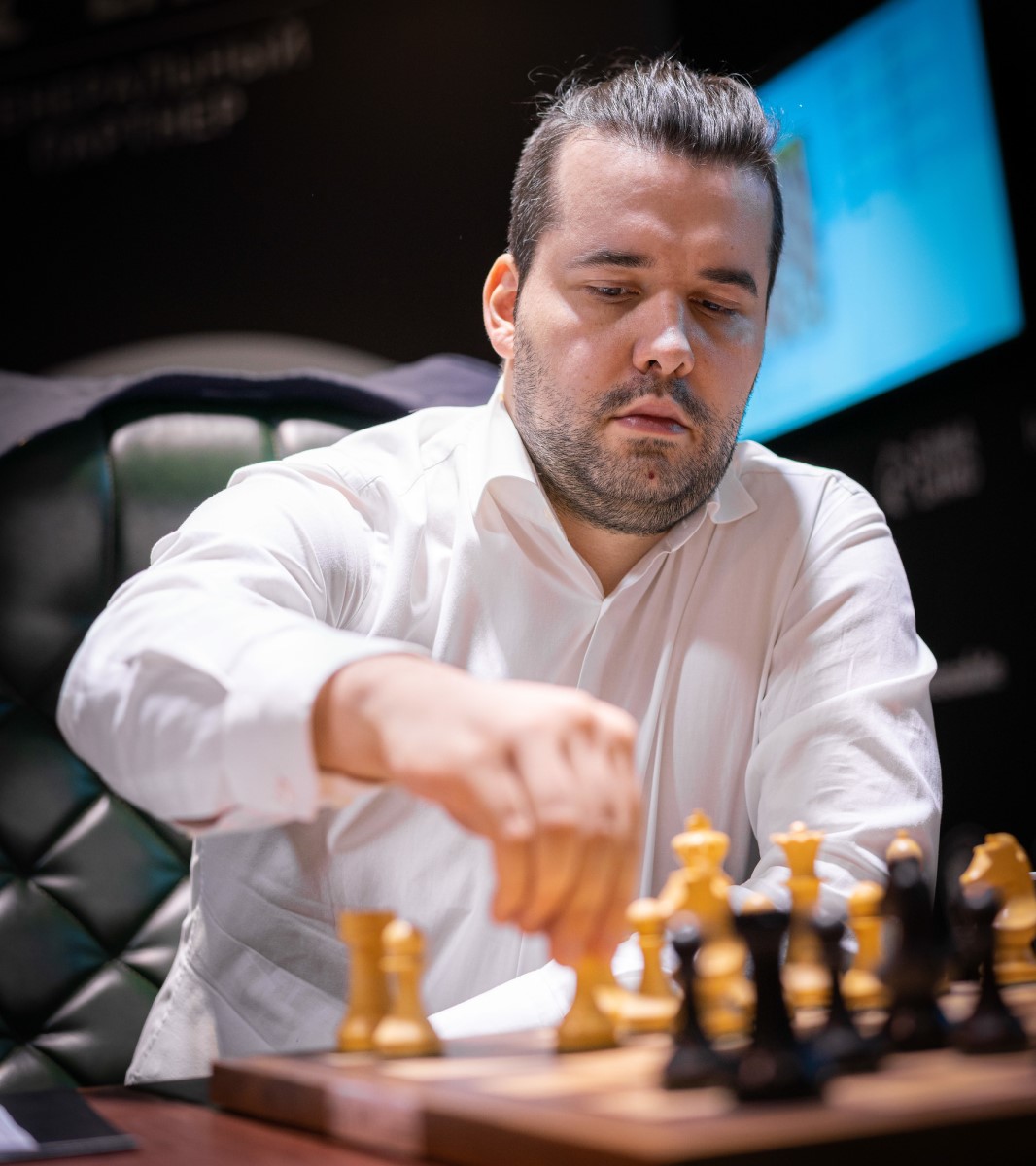 Russia’s highest-ranked player Ian Nepomniachtchi will be Magnus Carlsen’s challenger in the upcoming World Championship match, scheduled to take place at the end of this year in Dubai. Nepomniachtchi was sharing first place with Maxime Vachier-Lagrave when the sanitary crisis prompted FIDE to postpone the Candidates after round 7. In the second half, the Russian made the most of his chances while keeping a cool head, collecting two wins and four draws to secure tournament victory with a round to spare.

In the penultimate round, only two games were relevant in the fight to win the event. Anish Giri, who was a half point behind Nepo, faced Alexander Grischuk with black, while the leader also had the black pieces against MVL, who in fact still had a tiny chance of winning the event. By the time Vachier-Lagrave had definitely no winning chances, Grischuk had a clearly superior position against Giri. It did not take long before the two results were confirmed — Nepo had drawn and Giri had lost, which meant the Russian had become the next World Championship challenger.

In the current standings, Nepomniachtchi is a full point ahead of Giri, but due to the first  tiebreak criterion (direct encounter; Nepo beat Giri in round 1), even if Giri wins and Nepo loses on Tuesday, the Russian star would win the event. The fact that such an important tournament is often decided by mathematical tiebreaks has been negatively criticized by members of the chess community. Living legend Garry Kasparov voiced his concern:

Garry Kasparov’s rise to the top was meteoric and at his very first attempt he managed to become World Champion, the youngest of all time. In over six hours of video, he gives a first hand account of crucial events from recent chess history, you can improve your chess understanding and enjoy explanations and comments from a unique and outstanding personality on and off the chess board.

FIDE couldn’t make one more day available for a tiebreak? For God’s sake, they have a World Championship match ending in a tiebreak — Magnus Carlsen played two tiebreaks for the title, and they couldn’t afford to spend one day for a tiebreak? […] It’s not any criticism on Nepo, who wins the tournament by the rules, but it’s about the integrity of the competition.

As noted by Kasparov — and also by Giri himself — this whole discussion about tiebreaks should not take away from the fact that Nepo played “two great halves” (Giri) and is a completely deserving challenger for the world title. The discussion has more to do with how the event should be set up in the first place.

After beating Giri, Grischuk was asked about Kasparov’s remarks. Grischuk then noted that he had read not only Kasparov’s opinion but also that of Aleksey Dreev’s. He concluded that this tournament shows the disadvantages of playing a round-robin instead of matches — since results by players not in the fight for first have a massive effect on the outcome — and that it does not make sense not to have a playoff in case of a tie for first.

Once the discussion about the Candidates returning to the knockout format arises, chess fans surely go back to Kazan 2011, when a lack of entertainment value due to the high percentage of games resulting in draws also raised plenty of negative criticism. In fact, the fact that FIDE decided to hold the 2013 Candidates Tournament as a round-robin was mostly celebrated by the chess community. However, it is hard to argue against Kasparov and Grischuk’s assertions regarding the procedure to break a potential tie for first in such an important event.

But now that the intrigue is over, we can start preparing for the big match…

It would take a very brave man to bet against @MagnusCarlsen in the World Chess Championship Final. However, I don’t think Ian Nepomniachtchi will be an easy opponent for him. #FIDECandidates

…while following the final round of the Candidates will not be a waste of time by any means. Will Ding Liren score a third win in a row against a less-motivated Nepomniachtchi? Will Giri and Caruana end the tournament on a high note? They are, after all, incredibly well-prepared to play every single one of these games! 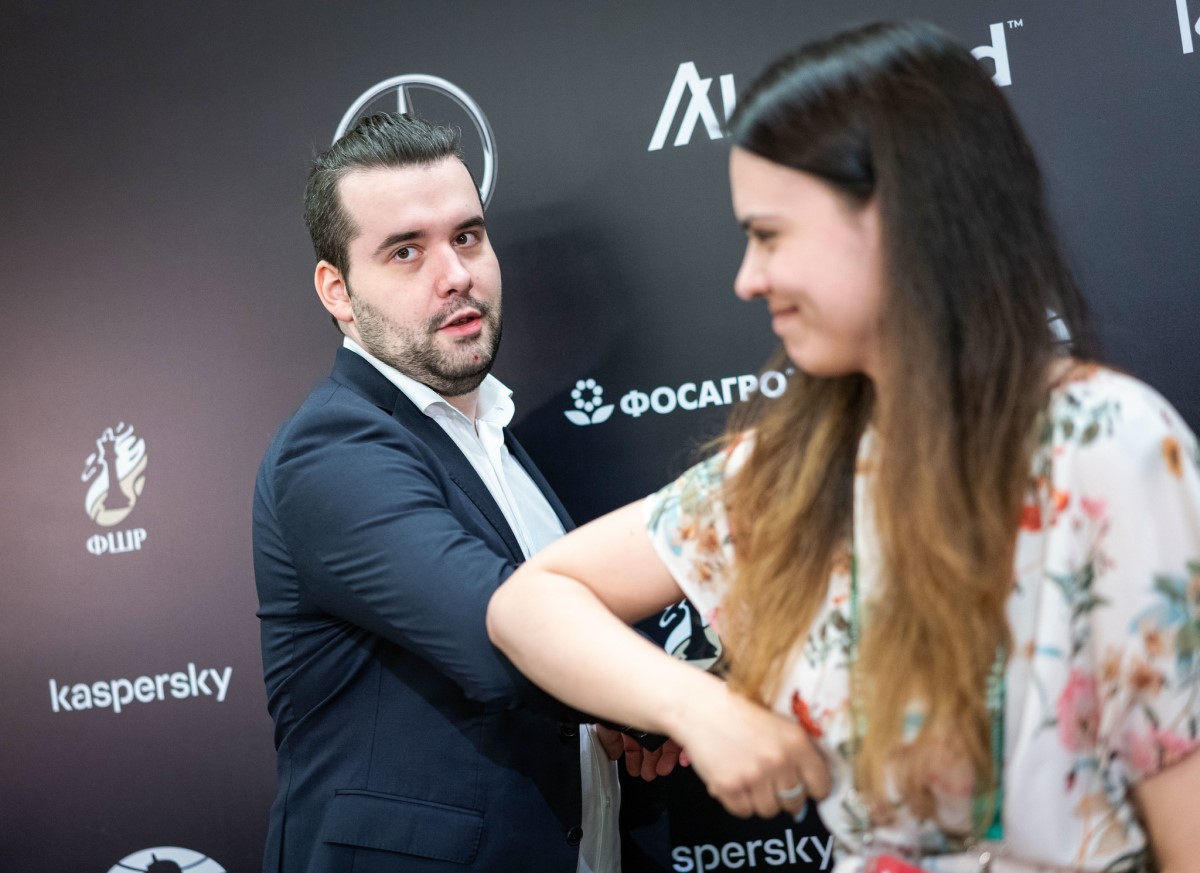 As usual, Grischuk’s post-game interview was filled with remarkable, witty insights. Talking about the game, the Russian grandmaster described his strategy in this game as that of a terrorist, explaining:

My plan was to play like a terrorist, to terrorize him with a draw, and if he goes for a worse position, then I will play, and that’s pretty much exactly what happened.

Eager to look for winning chances, Giri disregarded positional factors which left him in a rather unenviable position by move 27.

While it is difficult to find a plan for Black here, White can jump with his knight to e3 and create threats against his opponent’s backward pawns. Giri quickly lost the thread and ended up resigning in a knight endgame on move 51. The Dutchman was very critical of his play:

It was the combination of a mindset that doesn’t suit the position combined with a heavy lack of understanding of the position. […] Sometimes you are calculating lines, and for your opponent you make very bad moves in your calculation, that’s what I was doing, I was calculating lines that had nothing to do with reality. 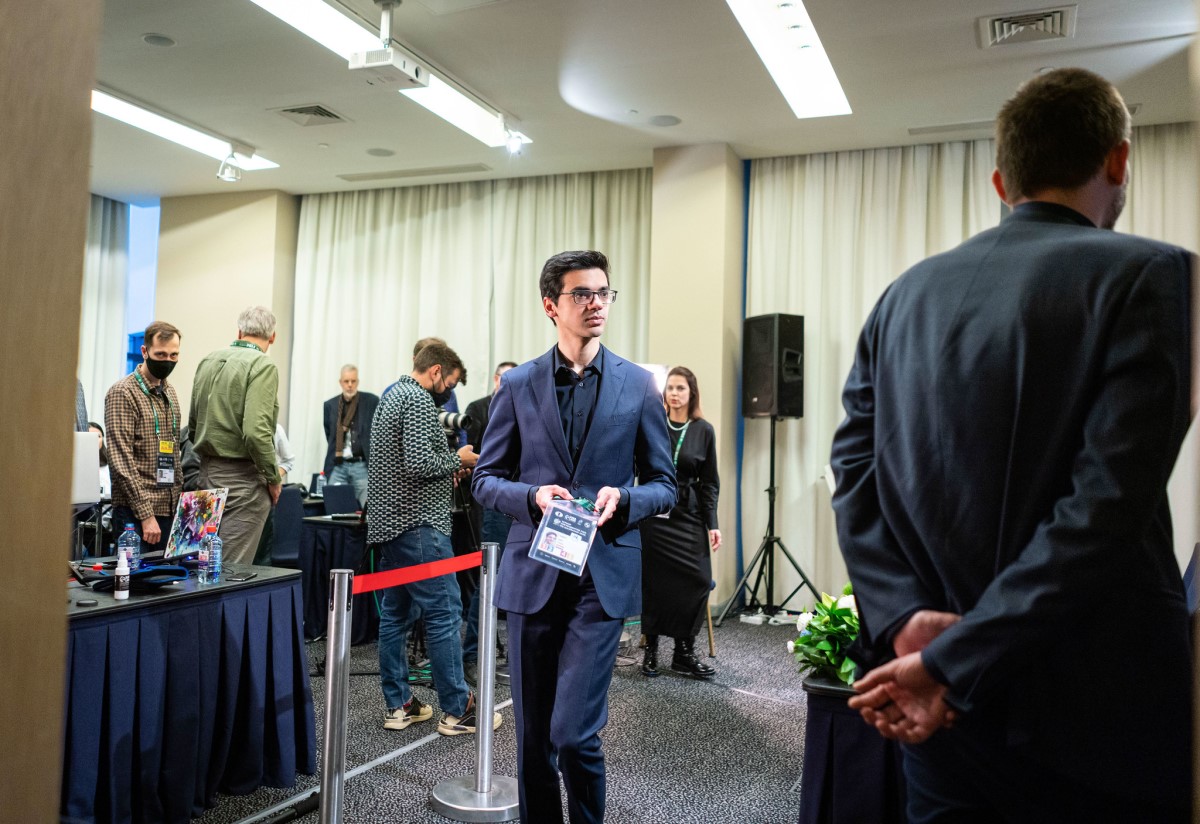 Anish Giri played an excellent tournament, and was particularly impressive in the second half | Photo: Lennart Ootes

This was, in fact, the only draw of the day. MVL was in a must-win situation playing black against an in-form opponent. The Frenchman tried his best, but ended up in a worse position, and later explained:

At least I got a sort of fighting game. Of course, a drawback of getting a fighting game with black is that you can end up clearly worse, and this was no exception.

Instead of desperately looking for ways to create something while already in an inferior position, MVL decided to simplify the position on move 28.

Fighting the Grünfeld with g3

The Grünfeld Defence was invented by the famous Austrian Grandmaster Ernst Grünfeld in the early twenties of the last century. One of the first reactions to it came from the great Akiba Rubinstein – the g3 system, fianchettoing the bishop to g2. After that many systems were tried to refute the Grünfeld and nothing really worked. So, Rubinstein’s recipe remains a very important positional approach against this dynamic opening.

28…Rb8 led to simplifications, and even though White is a pawn up, it is difficult for him to find a way to break through with his central pawn structure cemented on light squares. Of course, given the tournament situation, Nepo happily agreed to a draw after 42 moves. 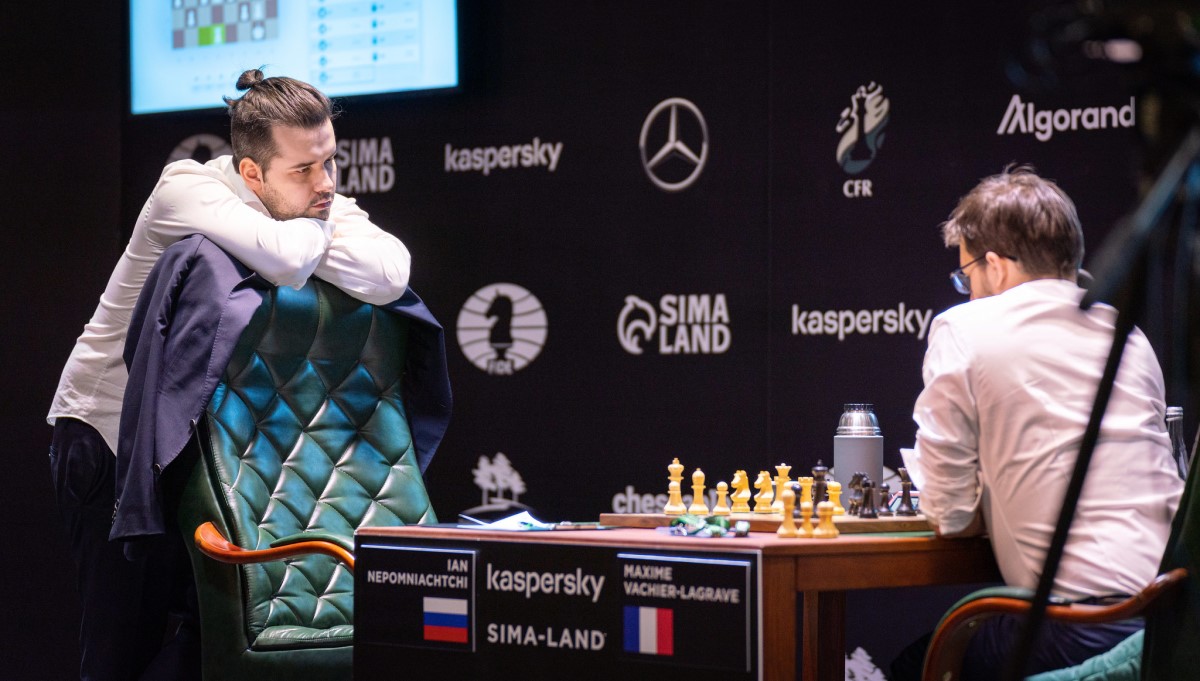 Some players decided not to use the big chairs, while Nepo found a way to get the most out of them | Photo: Lennart Ootes

This was Wang’s second consecutive loss and his third one since the resumption of the tournament. Daniil Dubov, who was commentating for the official FIDE channel, noted that it must have been hard for Wang to feel motivated after having to wait for a year in a tournament in which you have very little chances to get first place.

White played 40.Kh1 and after 40…Be4 there is no way to save the d-pawn. Wang played 41.d6 and resigned after 41…Bc6 42.Qb2 Qxd6. While analysing the diagrammed position, Caruana noted that after 40.f3, preventing the move seen in the game, “it feels like White should hold this one”. 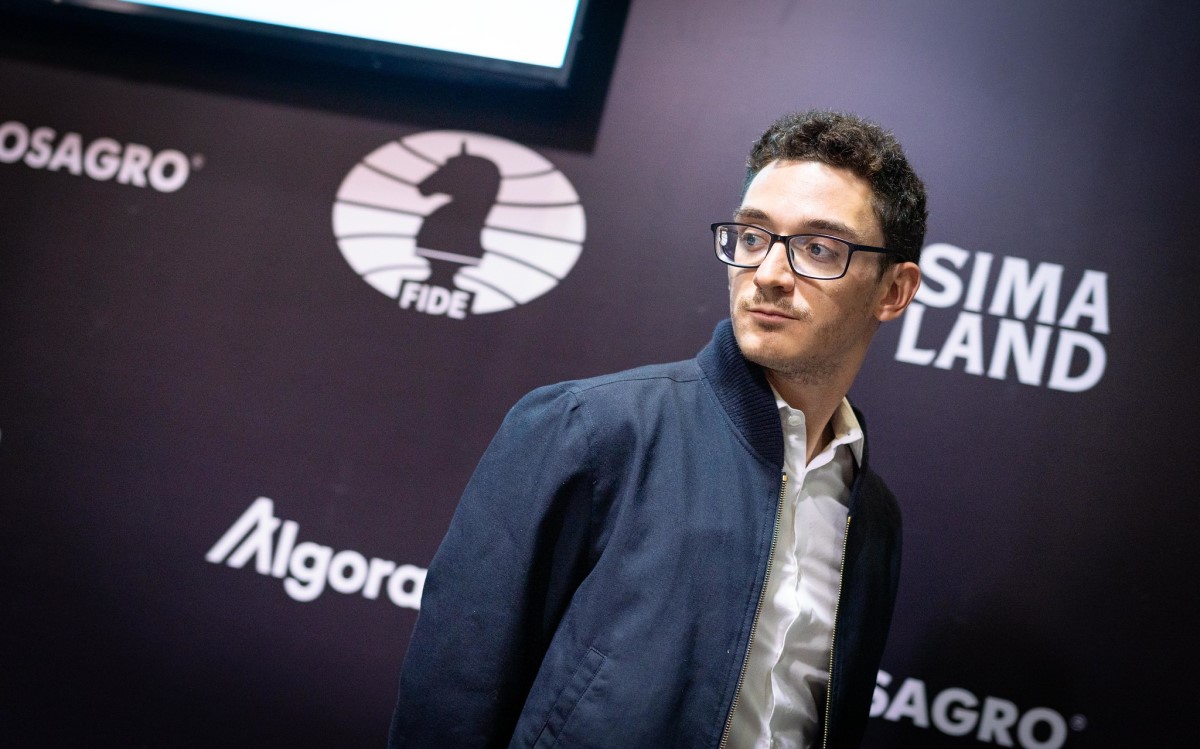 Both contenders had a tough tournament, before and after the postponement, however, Alekseenko came from losing twice in three games and Ding came from beating Grischuk in the previous round.

A fine strategical battle resulted in White getting an extra pawn against Black’s dangerous pair of bishops. After the time control, an inaccurate move by Ding left Alekseenko in the driver’s seat, but the Russian spoiled his advantage when he inexplicably made a rush decision in a sharp position.

On this DVD GM Nick Pert shows you typical mistakes by 1800-200 players. Themes as when to exchange pieces, how to convert an advantage, passive pieces, anticipating your opponents plan, openings and pawn structure are shown throughout the DVD.

While commentators Dubov, Almira Skripchenko and Evgenij Miroshnichenko were still struggling trying to find White’s best move in this position, Alekseenko suddenly opted for 47.Bc5, which turned the tables in Ding’s favour. The Russian was visibly upset with his decision shortly after, as Ding calculated the consequences of 47…Rb8.

As the engines show, there is no defence for White. Alekseenko tried to find a perpetual check after Ding set up a mate-in-one threat, but to no avail. Resignation came on move 61. 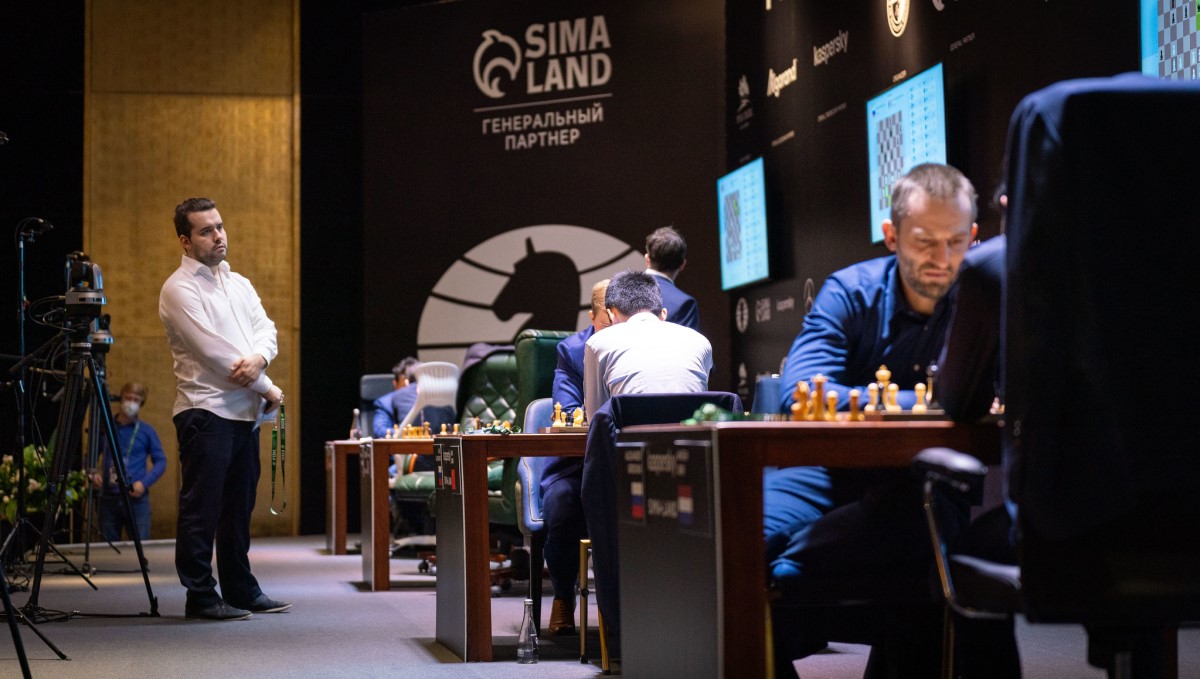 The intrigue is over, but the event goes on | Photo: Lennart Ootes