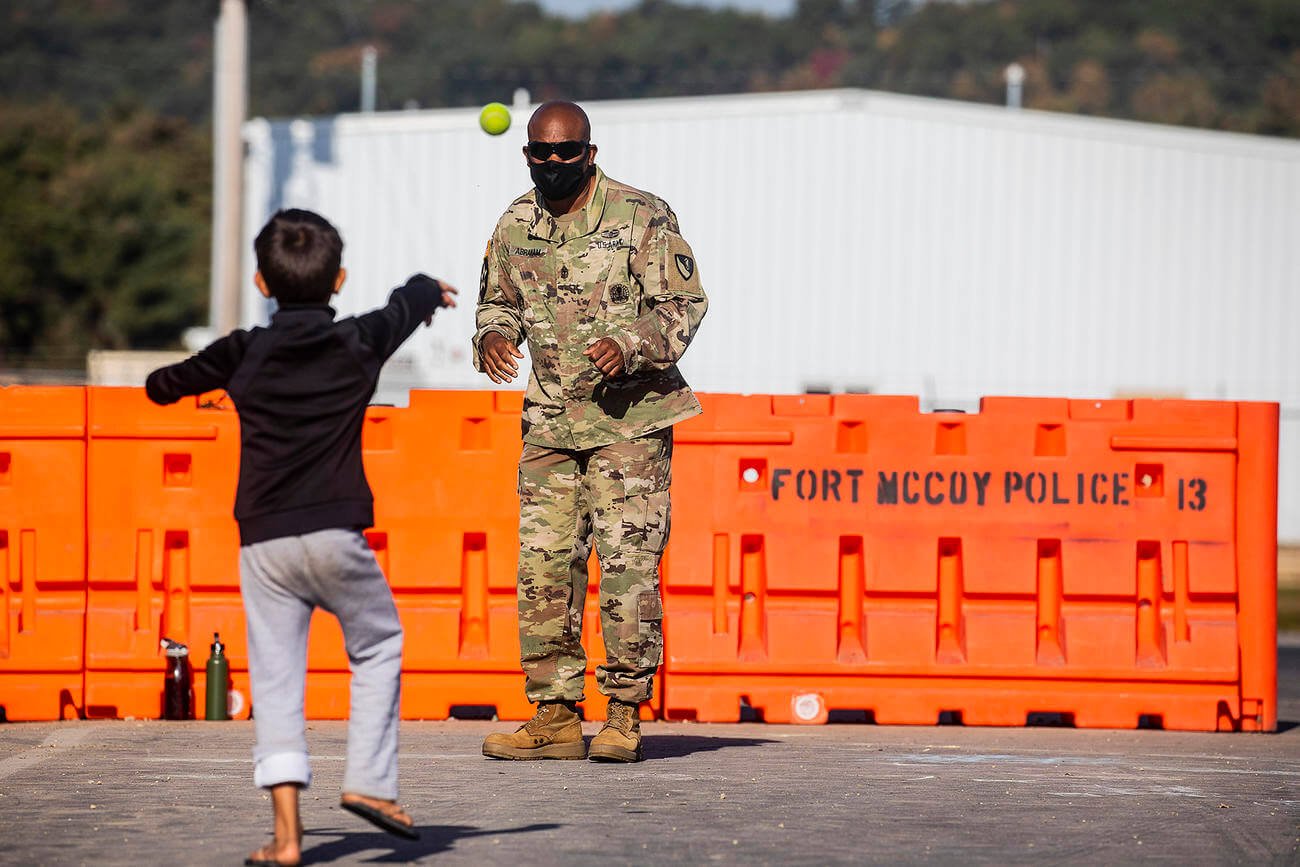 The military has settled in for what could be a long, expensive and politically volatile mission housing refugees who fled the end of the 20-year war in Afghanistan and are now searching for new homes in the U.S.

Congress on Thursday approved $2.2 billion just for the Pentagon’s resettlement efforts, which include more than 10,000 defense personnel. Meanwhile, the general in charge of eight resettlement communities on U.S. bases estimated the sites could be needed for another six months as Afghans navigate the immigration process and the search for permanent homes.

A measles outbreak, several alleged assaults by refugees in the base villages, and Republican claims of a human rights crisis and vetting issues have complicated the historic effort to take in the nearly 67,000 Afghan allies now in the resettlement process.

“We’re prepared to be here as long as we need to conduct this mission,” Gen. Glen VanHerck, the head of U.S. Northern Command, said Thursday. “We’ll be ready if we need to support [refugee housing] through the winter months and into the spring.”

The refugees were flown out of Afghanistan in August amid the chaotic military evacuation and a stunning Taliban takeover of the country and its capital, Kabul. They were taken to sites in Europe before being moved on to the U.S. to wait for final clearance for resettlement.

A total of about 2,600 had completed the process and been resettled off base as of this week, according to VanHerck.

A stopgap spending measure passed by Congress this week to keep the government open also contained $6.3 billion for Afghan refugee resettlement efforts, including the $2.2 billion.

The U.S. bases are now housing 53,000 Afghans, and another 14,000 waiting in Europe could begin flying to the U.S. next week after a 21-day measles quarantine lifts. That new influx could exceed the military’s current capacity, meaning an expansion of housing may be needed, the general said.

A measles outbreak stretched from the European sites to domestic bases with 24 cases of a disease virtually eradicated by U.S. vaccines, and caused all refugee flights to be stopped.

Measles vaccinations of all refugees were expected to be completed this week, and about 84% had taken the COVID-19 shot, VanHerck said.

But disease was just one of the troubles for the military.

Two Afghan refugees at Fort McCoy, Wisconsin, were arrested, one charged with crimes against minors and another for assaulting his wife. The FBI is investigating a report that a female soldier at Fort Bliss, Texas, was assaulted by a group of male Afghan refugees.

“In a population of 53,000, there have been eight reported cases of robbery and theft,” which is below-average crime rates in the U.S., VanHerck said when asked about crime.

The large-scale resettlement efforts have split Republicans on Capitol Hill.

Many are torn between attacking the Biden administration’s resettlement policies and bashing its chaotic Afghanistan withdrawal. They say Biden left behind thousands of Afghans who aided the U.S. war effort, and also set up lax vetting standards for those it did evacuate.

The alleged crimes at bases have fueled claims of a wider problem. Sens. Ted Cruz, R-Texas; Ron Johnson, R-Wis.; Tom Cotton, R-Ark.; and Kevin Cramer, R-N.D., wrote a letter to Biden last week, saying they are “deeply concerned that your withdrawal has imported an acute human rights crisis to our country.”

There were other isolated reports of issues with food and heat at some bases. The Pentagon denied there was ever lack of heat at Fort McCoy, despite reports, and said it is providing three meals daily, including halal meat — Islamic custom requires meat to be blessed before it is eaten — and 24-hour access to food.

The Department of Homeland Security is the lead federal agency responsible for what is called Operation Allies Welcome. It coordinates efforts by the Pentagon and other agencies.

The growing Republican opposition to the resettlement efforts was on display during the government funding debate, as every GOP senator backed an amendment from Cotton aimed at curtailing aid to the Afghan refugees. The amendment failed on a party-line 50-50 vote.

Cotton’s amendment would have cut off aid for housing, food, medicine and other needs after March 31, 2023, for Afghans who come to the country through parole, a process that allows refugees to enter the U.S. quickly during humanitarian crises.

“Insultingly, these benefits would last much longer than the eight months of benefits given to SIV holders who actually served alongside American forces,” Cotton wrote in a Fox News op-ed this week, referring to the special immigrant visa program.

Background checks of incoming Afghans also have become a political issue. Al-Qaida and other terrorist groups still operate from Afghanistan, and 13 U.S. troops were killed in a suicide bombing during the August withdrawal.

“Because of the chaos, we also evacuated many Afghans who have no record of assisting us or our allies,” Sen. Rob Portman, R-Ohio, said on the Senate floor this week in support of Cotton’s legislation.

Once refugees clear the screening process on military installations, they are resettled into communities throughout the country. Afghans either can let a resettlement agency place them in an area, or they can choose one based on family ties, according to the State Department.

“Over the past few weeks, we have resettled several hundred Afghan individuals and families,” said Timothy Young, a spokesman for the Lutheran Immigration and Refugee Service, or LIRS. “We’re expecting to resettle several thousand more in the months to come.”

Many of those the nonprofit has assisted end up in the Washington, D.C., suburbs and northern Virginia, but there is a struggle to find safe, affordable housing for Afghan families, Young said in an interview.

“This is obviously in the context of a general affordable housing shortage here in the States,” he said.

Ultimately, refugees should have final say over where they end up — regardless of whether they go at it alone or through a charity like LIRS.

“We can make placement recommendations and let them know where the most robust resources are but ultimately that is a decision that they will make,” Young said.

Related: Our Next War in Afghanistan Is Already Looming. And It May Be Even Harder.

© Copyright 2021 Military.com. All rights reserved. This material may not be published, broadcast, rewritten or redistributed.