A defiant Mamata Banerjee invoked the spirit of the Royal Bengal Tiger on Tuesday, as she and BJP chief JP Nadda traded barbs while on the campaign trail ahead of the Assembly election.

“I am not weak. I am strong. I will walk with my head held high till the time I am alive. I will live like a Royal Bengal Tiger till the time I live,” Ms Banerjee roared, even as senior leaders – the most recent of whom was former Forest Minister Rajib Banerjee – quit and join the BJP.

The Chief Minister was in East Bardhaman and Murshidabad districts and JP Nadda flew into Tarapith in Birbhum before moving on to Lalgarh in Jhargram – a former Maoist hotbed where the BJP seems to have gained some ground.

In Murshidabad Ms Banerjee also referred to Mir Jafar – the military commander of Nawab Siraj-ud-Daullah, and who sided with the British against him in the Battle of Plassey in 1757 – and said Bengal would never forgive traitors.

In Tarapith, Mr Nadda said: “(Under) Pradhan Mantri Kisan Samman Nidhi, Rs 14,000 has been distributed to 11 crore farmers… but 73 lakh farmers in Bengal were denied this. If Modiji comes to power, in our first cabinet meeting we will ensure this money is given.”

Ms Banerjee’s response was scathing: “BJP only lies. They say Mamata is blocking farmers’ money (but) did you not get Krishak Bandhu (a state scheme for farmers) money? Now tell Modi to send the money he promised. We have sent names (but) they don’t send the money… lie every day.”

She also attacked the centre over the farmers’ protest against the new agriculture laws.

“See what is happening in Delhi. They have put nails on the road to stop farmers. Those bills will finish farmers. Adani will get everything… they have to repeal everything,” she said. 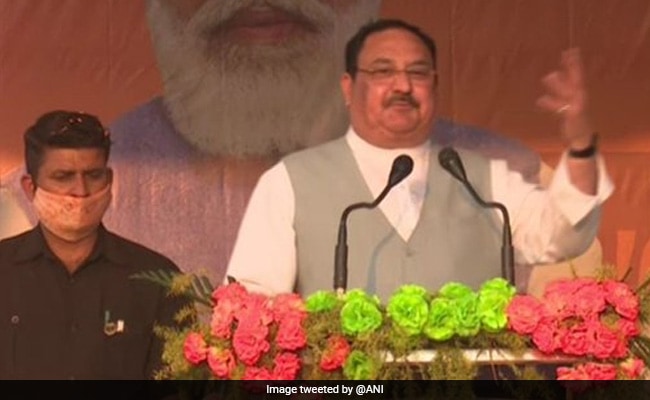 Ms Banerjee also had a message for ex-Trinamool leaders who have joined the BJP in recent weeks. She referred to the popular Bengali saying “dushtu gorur che phanka gowaal bhalo“, which translates as: “An empty cowshed is better than one full of naughty cows”.

“There is no reason to try and scare me… to think I am weak. Those who want to join BJP should leave. There is no place for such people in our party,” she declared.

To this Rajib Banerjee shot back: “There will no cows left in your cowshed in a few days.”

The Chief Minister also responded to charges about the safety of women in her state.

Mr Nadda had earlier claimed “domestic violence is most in Bengal… rape is happening the most here and human trafficking is the also most”.

“In Bengal the freedom our mothers and sisters have… it doesn’t exist anywhere. The peace and respect they have doesn’t exist elsewhere. Go and see what is happening in UP,” Ms Banerjee said.

Mr Nadda also accused the Chief Minister of appeasement and referred to the Bengal government permitting Muharram celebrations during the lockdown but not allowing Saraswati Puja celebrations.

“Will Be Hard Not To…”: Top Republican Jokes About Hitting US Speaker Nancy Pelosi

Death of a Salesman revisited

Policybazaar files DRHP with Sebi, aims to raise over Rs 6,000 cr via IPO

Growing concerns of vaccination for differently-abled in rural India