In every game, you will be guided through its subtle tips, and learn to become a strong player able to more easily refute your opponent’s mistakes. You will experience the typical problems of the defender, have great fun learning openings, and experience the joy of playing brilliant games.

Does it make sense to memorize reams of theoretical variations that rarely appear on the board? What you really need is to feel so at home in certain position types that you master common motifs in your sleep. Unfortunately, the typical tactical elements and traps of sharp systems rarely appear in GM games, because the opening variations they play represent optimal play from both sides. However, theoretical variations are only the tip of the iceberg of what lies in a sharper position.

When a strong player is up against a weak player, typical attacking ideas and tactical motifs become much more visible, and that’s exactly what happens when you play against Fritz 18. You are given the opportunity to conduct attacks that will often end in fireworks in your favor. 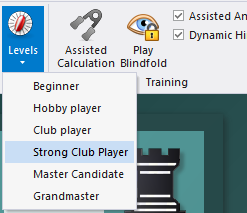 In order to illustrate this, consider the example of four famous sharp systems. All games below were played using the “strong club player” level.

In the Spanish Marshall Attack, there are many opportunities that White can miss. Fritz always falls for a motif that appears in a surprising number of variations: As soon as the black rook comes to e6, sacrifices for minor pieces on f4 are in the air. For example, White has an unprotected rook e1, or the opening of the g-file allows the deadly Re6-g6.

And here are two examples of the winning motif …Nf4:

(The games have brief comments, generated by Fritz while the game is being played).

In the classic main system of the Grünfeld Exchange Variation, White can give up the rook on a1 for the bishop on g7, and weaken Black’s king position. This is then torn open with e4-e5 (against Black’s f7-f6) or h4-h5. This frequently works when Black is imprecise. Alternately, White forms a very strong d-passed pawn.

The simplest trick: build up pressure on g6 and then play the breakthrough on e5. The bishop sacrifice on g6 then follows:

The attack with the undermining f6, to threaten mate on g7, is also typical:

The Poisoned Pawn Variation in the Sicilian Najdorf is a nightmare for Fritz 18, and there is no other way to put it. The king is so exposed in the middle that some kind of attacking setup always comes through. White can sacrifice comfortably. The standard threats then pile up in such a way that Fritz is virtually guaranteed to miss something.

The well-known piece sacrifice on f6 is very effective (15.Ne4 Be7 16.Be2 h5 17. Rb3 Qa4 18.Nxf6 + Bxf6), in which the black king is wedged between the open d- and f-file. Then there are multiple decoy motives in order to open up deadly break-in squares for the white queen.

In the classical Najdorf White attacks e6 with f4-f5. The path of precise defense is then solid but narrow. Fritz 18 deviates inconspicuously, but reliably, from the right path. Just like your opponent in a blitz game, things then explode, oft times on e6.

If you analyze the training games for these four openings soberly with a “normal” engine, you naturally ask yourself: isn’t Black sometimes playing a little recklessly? Well, if that seems too easy for you, just play a winning position with no tips to the end. That will help brings you down to earth.

Instructions for attack training with Fritz18

In the Fritz 18 start screen, click on “Easy Game” to enter the spectacular game mode. Select the level “Club Player” or “Strong Club Player“, depending on your taste. On the “Club Player” level, Fritz sometimes overlooks an easier mate when he can take a piece away. 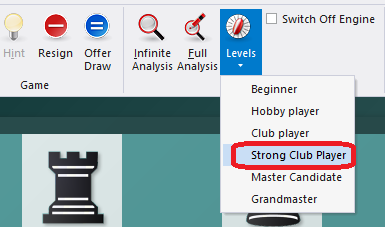 You now have various options to reach the starting position: You can, for example, “Switch Off Engine” (above under steps) and simply enter the moves. Then turn the engine back on and simply start playing for the side you want to play. This starts the game.

Likewise, you can copy a game from another program and insert it here with “Paste Game”, or click on the trains in the LiveBook. Finally, you can fetch your repertoire using the standard Copy (Ctrl-C) and Paste (Ctrl-V) from the notation tab “My moves” and start playing from any point.

Games against Fritz 18 contain more tactics than you typically experience against human opponents, and with a halfway sensible game, there is at least one winning trick in every game. This is because Fritz 18 is secretly helping out. If there is a way to tactically go wrong with a move that is halfway plausible at first glance, then he will play it too. In this way, even losing positions can often be saved through stubborn resistance.

Speaking of which, don’t forget that after the game you can use the numerous training tools in Fritz such as “Full analysis” or “Blunder Check” to see what opportunities you may have missed.

Have fun with this completely new form of training!