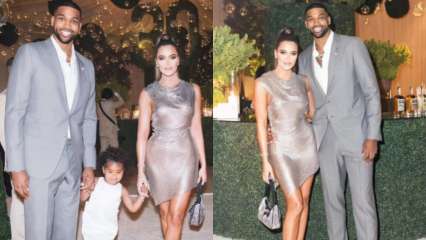 Khloe Kardashian and Tristan Thompson have allegedly split once again. The couple has been dating each other on and off and have a daughter, True Thompson who is three.

Khloe and Tristan’s split comes as the couple was seen trying to work things out on the final two episodes of ‘Keeping Up with the Kardashians'(KUWTK).

They had recently filmed the show, talking about the future together, with Khloe even considering moving to Boston to be near him as she continued to talk about having another child together.

But it was over the weekend that the couple seemed to go on different paths, as Tristan was pictured at a Bel Air house party. He was seen disappearing into a bedroom with three women and came out disheveled thirty minutes later.

He was later caught at the partying at Los Angeles hotspot the Nightingale Plaza. According to Dailymail.com, Tristan headed straight for the bar after arriving at the party just after midnight and did a round of ultra-luxurious Deleon tequila shots while swigging Moet champagne before repeatedly grabbing the bottom of a female guest.

In the second part of KUWTK reunion, Khloe was heard saying that she rebuilt trust with Tristan after seeing how hard he fought to get back with her. The couple had started dating 2016 and welcomed their daughter True, in 2018, just days after it was reported that the NBA player had cheated on Khloe multiple times.

‘Bigg Boss 15’: Names of CONFIRMED contestants, theme and timing – all you need to know