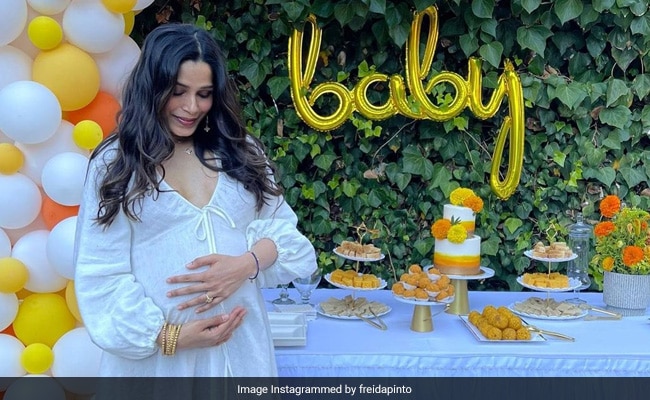 Freida Pinto’s friends hosted a perfect baby shower for her, pictures from which she shared on her Instagram profile on Tuesday night. For her special day, mom-to-be picked a white outfit and she looked simply stunning. We also got a glimpse of the decor in the pictures. An excited Freida Pinto wrote in her caption: “Reminiscing about this sweet baby shower! Thank you to my awesome tribe of sisters who made this such a special day for me.” Thanking her friends, the Slumdog Millionaire actress added, “Thank you Sonam and Preeti Desai for leading the charge and Dani Ruiz, Artemis Poray and Kacey Hagler for bringing in the finishing touches so beautifully. I feel so blessed and lucky.”

Nargis Fakhri, who shared the couch with Freida on Karan Johar’s talk show Koffee With Karan, dropped heart-eyed emojis in the comments. See the pictures from the baby shower here:

The actress got engaged to her longtime boyfriend Cory Tran, an adventure photographer in November 2019. They announced the pregnancy in June this year by sharing mushy pictures. “Baby Tran, coming this Fall,” she wrote.

Freida Pinto has featured in films like Rise Of The Planet Of The Apes, Immortals, Trishna, Love Sonia and the Netflix movie Mowgli: Legend Of The Jungle. She also starred in Love, Wedding, Repeat and Hillbilly Elegy.

Other than films, Freida Pinto frequently features in headlines for her campaigns for women empowerment and for the underprivileged children. She was one of the narrators of the documentary Girl Rising along with Meryl Streep, Anne Hathaway, Cate Blanchett, Sushmita Sen, Priyanka Chopra and Salma Hayek.

On a Pacific Island, Russia Tests Its Battle Plan on Climate Change

Amid Pandemic Turmoil and Curriculum Fights, a Boom for Christian Schools