Retail inflation cooled to a four-month low of 5.3 per cent in August from 5.59 per cent in the previous month, led by subdued prices of food articles and a high base effect. Inflation based on the Consumer Price Index (CPI) remained within the Reserve Bank of India (RBI)’s tolerance band for the second consecutive month, according to the data released by the Ministry of Statistics and Programme Implementation, on Monday.


While economists estimate inflation to ease further in the coming months, they believe that the RBI will continue with its accommodative monetary policy stance and begin interest rate hikes only in the next fiscal year, amid risks to the growth outlook.


The core-CPI inflation, which is non-food and non-fuel, eased to 5.5 per cent in August from 5.7 per cent in the previous month.


The six-member monetary policy committee (MPC) had raised the inflation projection for the current fiscal year by 60 basis points (bps) to 5.7 per cent in the August meeting. The MPC resolution had also put the onus of bringing down petrol and diesel prices on the Union and state governments through tax reduction.


Aditi Nayar, chief economist, ICRA, said the sequential downtick in the headline and the core August CPI print was likely to allay the discomfort in the tone of the upcoming policy review. “Moreover, fears of immediate policy normalisation have been doused with the Q1 FY2022 GDP (gross domestic product) growth being mildly lower than the MPC’s own forecast of 21.4 per cent. The stance and policy rate are likely to be left unchanged until strengthening domestic demand replaces supply-side constraints as the key driver of inflationary pressures,” said Nayar.


ALSO READ: Inflation tax over and above the oil tax

“At present, we believe policy normalisation could commence in February 2022, with a change in the stance of monetary policy to neutral from accommodative, followed by a hike in the repo rate of 25 bps each in the April 2022 and June 2022 meetings,” said Nayar. 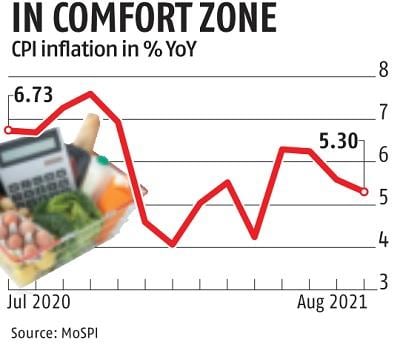 Sunil Kumar Sinha, principal economist, India Ratings and Research, said that although monsoon rainfall was lower in August 2021, it did not impact the cereals inflation adversely. “On the contrary, cereals witnessed the seventh consecutive month of deflation. Low agriculture productivity and deflation in cereals prices may impact the rural income and in turn the rural demand. In fact, it is also finding a reflection in the low rural wage growth,” said Sinha.


However, certain other items in the food basket saw an elevated rate of price rise. While the inflation rate in eggs eased compared to the previous month, it remained high at 16.33 per cent.


“The headline CPI may average almost 60 bps lower than the RBI’s forecast of 5.7 per cent. With the monetary reaction function currently hinging more on growth revival becoming sustainable, the RBI is unlikely to change key policy rates this year and the focus will be more on surplus liquidity management,” said Arora.


Nikhil Gupta, chief economist at Motilal Oswal Financial Services, said that inflation will ease further towards 4.2-4.3 per cent in October-November 2021. “Cut in fuel taxes around Diwali (we consider it as a highly likely scenario) may support lower inflation. Therefore, we don’t expect RBI to hike rates in FY22,” said Gupta.

Death of Jihadist Behind Attack on U.S. Soldiers Is Latest Blow for Militants