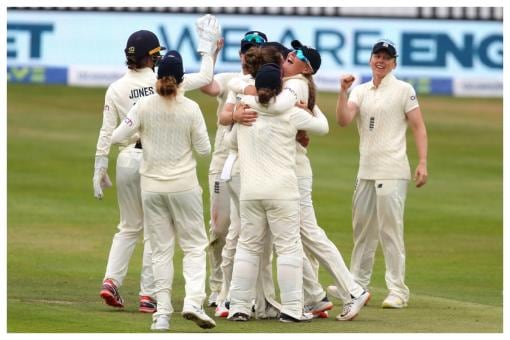 A mini collapse left India in deep trouble against England in the only Test match at Bristol. India lost four wickets for as many runs; fall of Smriti Mandhana opened up the flood gate just before the close of play. Mandhana (78) was quickly followed by nightwatchmen Shikha Pandey(0), and skipper Mithali Raj (2) to the dressing room. Later Punam Raut (2)’s departure reduced India to 183/5. Harmanpreet Kaur too was given out but she chose to review it and replays confirmed a huge edge, giving her a second chance. At close, India were 187/5 in reply to England’s 397/9, trailing the visitors 209. They still need another nine runs to avoid follow on.

Earlier Shafali Verma and Smriti Mandhana provided India Women a confident start but the visitors still have a mountain to climb after England Women posted a mammoth 396 for nine in their first innings in the one-off Test, here on Friday. It was the highest-ever total scored by a team against India in Test cricket and the visitors are now trailing by 209 runs with Verma (96) and Mandhana (78) taking India to 63 for no loss at tea on the second day. Verma was at her usual aggressive self as she cut and pulled in her own inimitable style. The 17-year-old not only presented the straight bat for defence with grace, she also hit a six off Nat Sciver with remarkable ease.It was only the second six hit by an Indian woman in Test cricket.

Earlier resuming at the overnight score of 269 for six, England lost Katherine Brunt (8) and Sophie Ecclestone (17) in the morning session but Sophia Dunkley continued to frustrate the visitors, remaining unbeaten on 74. England added 127 runs to their overnight score. Dunkley and Anya Shrubsole (47) shared valuable 70 runs for the ninth wicket. Debutant off-spinner Sneh Rana was the pick of the bowlers for India with figures of 4/131, while Deepti Sharma (3/65) too impressed with the ball. India are playing their first Test in nearly seven years.

‘It Was a Difficult Situation, We Decided to Stay and Play’

In boost for Indian IT, US to conduct rare 2nd lottery for H-1B applicants