Come July 2022, people in India and Singapore can transfer money to each other in an instant, a major step towards full currency convertibility for the Indian rupee.


The Reserve Bank of India (RBI) and the Monetary Authority of Singapore (MAS) on Tuesday said they would link their respective fast payments systems — Unified Payments Interface (UPI) and PayNow — to enable users to make low-cost fund transfers between the two countries.


UPI, developed by National Payments Corporation of India, facilitates instant money transfer and payments through mobile phones. PayNow is the UPI equivalent of Singapore. The money transfer facility will be “on a reciprocal basis without a need to get onboarded onto the other payment system”, the RBI said in its statement.


Currently, money can be transferred from Singapore to India through a rupee-denominated non-resident external (NRE) account. For transferring money to Singapore from India, a person has to fill a Liberalised Remittance Scheme (LRS) form and bear hefty fees.


The Indian rupee is not fully convertible, which means one can receive foreign exchange freely but there is a limit while transferring funds. Currently, the limit set by the LRS is up to $250,000 in a year. The Singapore dollar, however, can be freely transferred.


The details such as limits of transfer and exchange rates are still sketchy, but experts say the same facility can be extended to the West Asia and North America corridors, through which the flow of remittances is the heaviest to India.


According to a person familiar with the RBI thinking, the tie-up with Singapore will help thrash out several issues in the international payments space. This will also help India fine-tune its payments system so that it connects seamlessly with the international flow of finance.


“One aspect that needs to be worked out is how to reduce currency conversion rates. The operational details will be worked out and announced in due course. At this stage the two central banks have agreed to work on setting up the connection,” said the person, requesting anonymity.


In its official statement, the RBI said, “The UPI-PayNow linkage is a significant milestone in the development of infrastructure for cross-border payments between India and Singapore, and closely aligns with the G20’s financial inclusion priorities of driving faster, cheaper and more transparent cross-border payments.”


The MAS said that when this is implemented, fund transfers can be made from India to Singapore using mobile phone numbers, and from Singapore to India, by using UPI virtual payment addresses (VPA). “The experience of making a PayNow transfer to a UPI VPA will be similar to that of a domestic transfer to a PayNow VPA,” said MAS.


This could be taken as the “first baby steps” by the banking regulator to allow Indians to directly invest in Singapore’s exchanges, said Sandeep Srinivasa, founder of fintech firm RedCarpet. “Also, this would mean that outward remittance will not have to go through paper stamps, which is a remarkable regulatory innovation for India,” Srinivasa said. 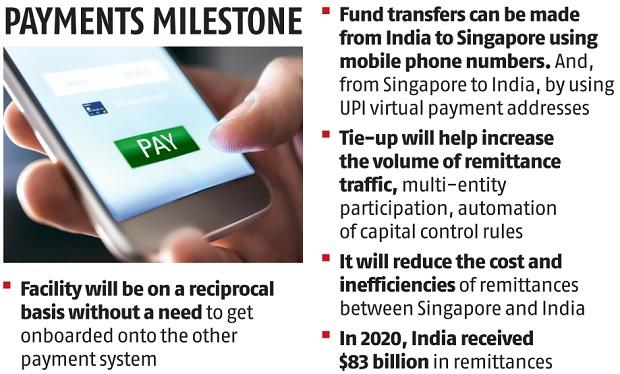 According to Asheesh Chanda, founder and CEO of Kristal.AI, the reduction in time and charges for cross-border payments will help grow trade between the two countries and will incentivise more retail investors to access global markets.


“Currently, they pay up to Rs 3,000 in inter-bank charges, which are over and above the LRS processing fees by banks. This eats into their returns and hence discourages small investors from accessing global markets. The project is a welcome initiative and we look forward to its final rollout,” he said.


The pact is following the RBI’s vision document on payments and settlement systems for 2019-21. One of the ‘goal-posts’ for 2021 was fostering innovation in a regulatory sandbox environment for legal entity identifiers (LEIs) for large-value cross-border payments. Bringing down charges for cross-border payments for trade receivables was also part of the vision.


LEIs are legal entities across the globe that facilitate such cross-border large-value transactions. The RBI, in its May 2019 vision document, had said it would tie up with other global central banks for oversight of these LEIs.


“These enhancements constitute a significant upgrade to the design of cross-border payment systems today,” the MAS said in its statement on its website.


Sopnendu Mohanty, chief fintech officer of MAS, said the tie-up would reduce the cost and inefficiencies of remittances between Singapore and India, and thus directly benefit individuals and businesses in the two countries.


The linkage between PayNow and UPI “also paves the way for establishing more comprehensive digital connectivity and interoperability between the two countries”, Mohanty said. Before inking the pact, the two countries were engaged in developing cross-border payments systems using cards and QR codes.


India is the largest recipient of inbound remittances across the globe accounting for 15 per cent of the global share. In 2020, India received $83 billion in remittances, a drop of 0.2 per cent compared to 2019.

Here’s what will happen when the Fed’s ‘tapering’ starts, and why you should care