India will turn to Finance Minister Nirmala Sitharaman’s budget on Monday to see how she prioritizes spending to get the pandemic-ravaged nation back to being the world’s fastest-growing major economy.


Sitharaman’s plan will likely rely on generous public spending to spur activity, putting more money in the hands of the average taxpayer to boost consumption and easing rules to attract investments when she presents the budget at 11 a.m. in New Delhi. 
“Expectations are high, going into this budget,” said Samiran Chakraborty, an economist with Citigroup Inc. “Expenditure profile could move from survival to revival as the focus on infrastructure increases.”


That spending may continue to keep the fiscal deficit far wider than the 3 per cent of gross domestic product mandated by law. The budget gap for the year to March will probably be 7.25 per cent of GDP against a planned 3.4 per cent, according to a Bloomberg survey. The same poll shows the target for the next fiscal year will likely be 5.5 per cent. 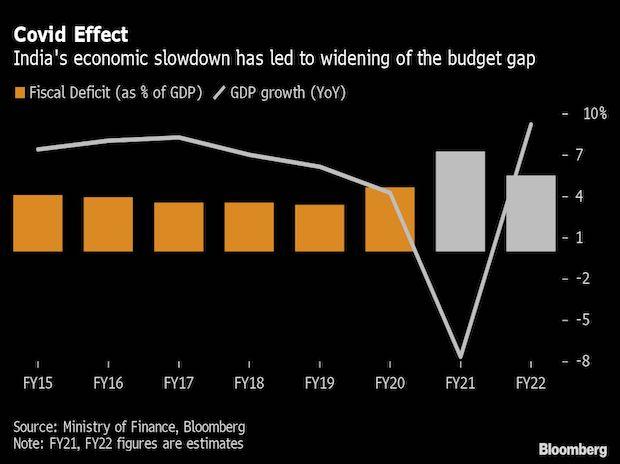 Missing deficit goals will be the least of the worries for Prime Minister Narendra Modi’s government. It has to contend with creating jobs for the millions who lost their livelihoods to lockdowns to combat the world’s second-largest coronavirus outbreak, quelling protests by farmers against agriculture reforms and reviving growth in an economy headed for its biggest annual contraction on record.


India’s GDP will shrink 7.7 per cent in the year ending March, according to the statistics ministry. The Finance Ministry estimates GDP will likely expand 11 per cent next fiscal year, people familiar with the matter said, commenting on the forecast that will once again make India the world’s fastest-growing major economy ahead of China’s estimated 8.1 per cent pace.


A pickup in tax collections in recent months will offer some respite for Sitharaman, who will also seek to raise record amounts by selling state assets in the new financial year starting April after the pandemic all but ruined disinvestment plans in the current year. The exchequer will also earn a dividend from the central bank, which is expected to complement fiscal steps with monetary stimulus next month as inflation cools.


Opinion is divided about new tax measures in the budget, with some calling for a tax on the rich to fund pandemic-related expenditure and others opposing any such move.


“A 4 per cent tax on the nation’s 954 richest families could raise the equivalent of 1 per cent of India’s GDP,” Oxfam said in a report released Monday. Economists including Nomura Holdings Inc.’s Sonal Varma think a Covid levy is a bad idea given that the economy is still normalizing after a strict and vast lockdown.


“The trend over the last few years has already raised the total taxes for high income earners to 42.7 per cent, including cess and surcharges, from around 30 per cent.”


She may announce a gross borrowing plan of Rs 10.6 trillion ($145 billion) for the 12 months starting April, according to a median forecast of 15 analysts surveyed by Bloomberg News. That’s less than the record Rs 13.1 trillion estimated for the current year.


The total spending plan for next fiscal may surpass last year’s Rs 30.4 trillion, with focus likely on expanding a jobs guarantee program to cities and increasing allocation on education, housing, and health as India rolls out a vaccine drive to inoculate 1.3 billion people. Outlay for defense may also see an increase, in a signal to China that India is prepared and capable of dealing with the border standoff.


“Unsurprisingly, many of the key themes in the budget will revolve around Covid-19, either directly on health issues, or regulatory support to sectors most affected” such as hospitality, retail, aviation, said Nomura’s Varma. “Infrastructure, agriculture, the social sector, promotion of domestic manufacturing, alongside incentives to boost construction and housing are likely to be the focus.”


While Modi’s popularity with voters has remained undiminished, there’s an expectation his government may use Monday’s budget to win over protesting farmers. The protesters have been opposing India’s new agriculture laws that they say will hurt incomes and leave them vulnerable to big corporations.


“The government has no choice but to loosen up their purse strings,” said Yamini Aiyar, president and chief executive of Centre for Policy Research in New Delhi. “They will have to be more generous with social security spending like expanding jobs programs to correct rising urban joblessness, health spending, expanded housing and more fiscal support for states and local governments.”

BS BFSI INSIGHT SUMMIT | What will be the shape of growth: U, V, W or K?

BS BFSI INSIGHT SUMMIT | What will be the shape of growth: U, V, W or K?

Carissa Yip wins the US Women’s Championship at 18