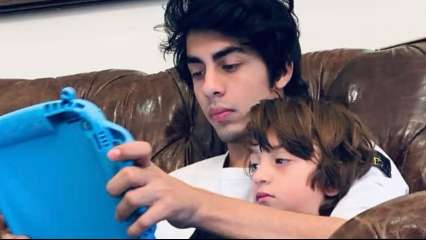 Gauri Khan, a film producer, and interior designer has released a new photo of her kids Aryan and AbRam Khan. AbRam is pictured sitting in Aryan’s lap, playing on a tablet with him.

Shah Rukh and Gauri have two children: Aryan is the oldest and AbRam is the youngest. Suhana Khan, their daughter, was born to them. Aryan recently received his bachelor’s degree in film studies from the University of Southern California. Suhana is also a film student at the Tisch School of the Arts at New York University.

Earlier while talking about Aryan’s ambitions, SRK had told in an interview with DNA, “We talk a little about filmmaking because he’s learning that. But he would like to recede from that because he wants to learn it on his own. We watch films, and while watching them, we talk about certain aspects of filmmaking. We talk about getting into trouble, picking up fights, how to beat up the other guy or answer back when a guy messes with you. He talks about his ambitions and where he would like to be one day. But he’s very clear that way. He just wants to be bigger than me, and that’s cool.”

On David Letterman’s show he said, “He came and said ‘I don’t think I want to act’. And his issue was, which I think is very practical and honest, he said, ‘Every time I’ll be compared to you. So if I do well, it will not be because I got skilled at this. It’ll be oh obviously he’s his son, so he will do well. It’s in the genes. And if I don’t do well, it’ll always be look at him. What his father did and look at him. What is he doing?’ So he said ‘I don’t want to be in that kind of position”.

As a child, Aryan made a brief appearance in ‘Kabhi Khushi Kabhie Gham’, and then dubbed for the Hindi version of ‘The Lion King’ as Simmba, with Shah Rukh portraying Mufasa.

Shilpa Shetty’s Undercut Was A Hair-Raising Tale For This Person. See Her Post