By Tuesday, September 14 we only had the four strongest teams left in the 2021 FIDE Online Olympiad: China, Russia, India, and the USA. It was a truly exciting semifinal to expect, and what happened didn’t let spectators down in terms of excitement!

Russia beat China in a two-round match, not having to play the tiebreaks, while the match between the USA and India turned out much more tumultuous. Eventually, the USA prevailed, setting up an exciting final between Russia and the USA.

Let’s dive right in and see how that happened!

How to watch?
The Knockout games of the FIDE Online Olympiad can be found on our live events platform: On playing days, expert commentary is provided on Chess.com/TV. 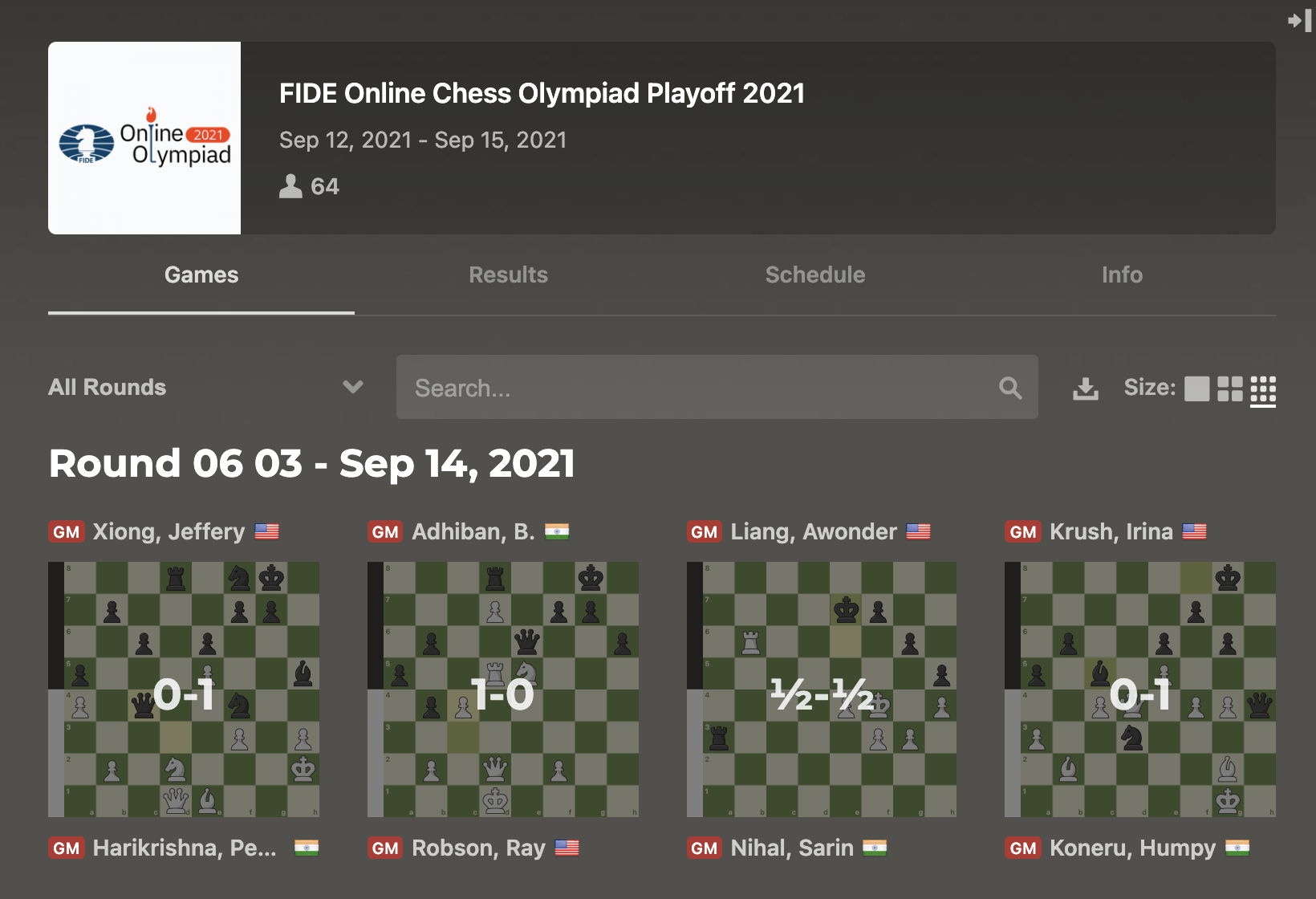 The first Seminal saw a confrontation between two of the world’s finest teams (the second one did, too!)—Russia and China. The teams’ paths here have been quite different: Russia has dominated throughout the event, having won all nine matches, and having won the quarterfinals without needing a tiebreak. All the players seem to be in fantastic shape.

As for China, it was a bit of a trickier journey, as they lost two matches during the playoffs of their division. However, truthfully, while they finished second behind Kazakhstan, there wasn’t ever a doubt they would qualify further, and on Monday the 13th, they showed some terrific chess against Poland.

The first match today ended in Russia’s win with a 3.5-2.5 score. In particular, the top boards drew their games (GM Daniil Dubov drew GM Ding Liren while GM Yu Yangyi drew GM Vladislav Artemiev and GM Hou Yifan drew GM Alexandra Goryachkina). As we can see, that’s a fantastic competition: on a female board, the world’s best female player, who is now somewhat retired, versus what many people think will be the world’s best female player in the years to come; that’s the case on every board!

However, it was on the three last boards where the match was decided. GM Andrey Esipenko outplayed Wang Shixu, this year’s World Cup Winner GM Alexandra Kosteniuk beat Women’s World Champion GM Ju Wenjun, and even though WIM Ning Kaiyu scored a win against IM Polina Shuvalova, the match was already won by Russia.

In the second match, China couldn’t come back: Russia won again, this time with the score of 4-2, eliminating China from the tournament and advancing to the finals.

This encounter saw even fewer draws: there was no winner in two games, while four ended up in a decisive result: Dubov beat Ding, Yifan outplayed Goryachkina, while Kosteniuk and Esipenko scored wins against Wenjun and Zhihang.

So, after their very convincing victory, Russia has stamped their ticket to the finals. The entire team is doing great and is playing amazing chess, but Russia’s fans should thank Esipenko and Kosteniuk, as both of them won in both rounds today.

It is very impressive to see how Esipenko never let go of a small advantage he had, even if at times that advantage seemed only psychological, and eventually caused to opponent to collapse under pressure.

The second match of the Semifinals, India-USA, had a very dramatic flow. In the first round, India scored a massive win with a very impressive score of 5-1. Two games were drawn, but four players brought India a full point: to be specific, GM Viswanathan Anand outplayed GM Jeffery Xiong, GM Pentala Harikrishna beat GM Dariusz Swiercz, GM Harika Dronavalli scored a win against IM Anna Zatonskih, and on the last board, WGM R. Vaishali turned out stronger than WGM Thalia Cervantes Landeiro.

With such strong teams competing, scores like 5-1 are rather rare, so it must have been very hard on the American team to come back in the next must-win round.

But, they did! In round two, Xiong managed to strike back against Anand, winning his game in a very convincing positional manner (see the annotations below). On board two, we saw new players: GM Vidit Gujrathi versus GM Ray Robson, and the latter went on to win his game. Additionally, GM Awonder Liang outplayed another well-known prodigy GM Rameshbabu Praggnanandhaa, and even though Drovanalli scored a full point against IM Nazi Paikidze, it wasn’t enough. 4-2 for the USA! And as for spectators, they got tiebreaks to enjoy.

During the tiebreaks, there was a change on boards one and two of the Indian team: Anand didn’t play. Instead, the top boards saw Harikrishna and GM Baskaran Adhiban represent their country.m Unfortunately for India, this change did not turn out well, as both of their top boards lost. Xiong beat Harikrishna, and Robson outplayed Adhiban. Additionally, GM Irina Krush won her game against GM Humpy Koneru, and furthermore, Cervantes on the last board outplayed Vaishali.

Even though India scored one win as well, the final result was 4.5-1.5 for the American team, and therefore, they will be facing Russia in the finals on Wednesday, September 15.

It was a fascinating day of the Online Olympiad, and hopefully, you will enjoy the suspense and action of the finals even more!

The FIDE Online Olympiad, a major online chess event for national teams, runs August 20-September 15 on the Chess.com server. More than 1,000 participants and 153 teams from all over the world are playing.