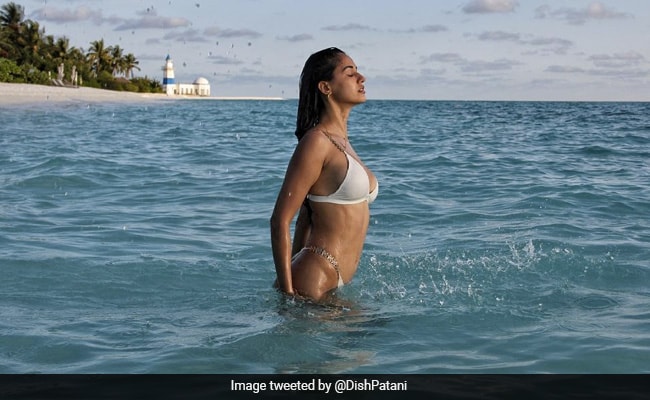 Disha Patani, being her stunning self, shared a new entry on the photo sharing application Instagram on Sunday and stunning can’t even begin to describe it. The 28-year-old actress can be seen chilling at an undisclosed beach destination in the photograph. She didn’t say if it was a throwback or a recent click but we simply love it. The actress can be seen wearing a white bikini. She just added a couple of emojis to her post. No caption needed. Just like us, Disha Patani’s Instafam too loved the picture and the rain of comments on her post proves that. Within no time, the actress’ post was filled up with heart and flame emojis and TBH we are not surprised at all.

In terms of work, Disha Patani was last seen in Prabhu Deva’s Radhe: Your Most Wanted Bhai, which was her second project with Salman Khan. The duo have earlier co-starred in the 2019 film Bharat, which also featured Katrina Kaif and Tabu. Radhe: Your Most Wanted Bhai also stars Tiger’s father Jackie Shroff and actor Randeep Hooda in pivotal roles. The film released on Eid this year. She will next star in Ek Villain 2, alongside Arjun Kapoor and John Abraham.

Priyanka Chopra Jonas: I’m very confident in what I bring to the table now – Times of India

Get crafty with the corners

Collection recovery in securitisation yet to reach March 2021 levels

5 from Supersalone for your home