What’s cooking at Chromepet Shawarma Kings, an outlet that celebrates MS Dhoni and all things cricket?

The openers of Chennai Super Kings are walking out. The starters at Chromepet Shawarma Kings are being prepared.

When the first ball is bowled, fans gather outside this small city outlet to catch the excitement. Inside, a few college students — who have ordered a Helicopter Shawarma and a Pine Yellow mojito — are glued to the television to cheer their favourite men in yellow.

At Chromepet Shawarma Kings, located at Rajendra Prasad Road, food and sport jostle for space. Freshly-painted walls display a lot of ‘yell-ove’, with graffiti of cricketers MS Dhoni, Suresh Raina, Ravindra Jadeja and Dwayne Bravo dominating the show. A poster of Dhoni with the phrase ‘Definitely not’, a popular catchphrase once uttered by the captain, finds pride of place near one of the tables. At the centre of all this is 34-year-old Arafat Ahamed, a software engineer-turned-entrepreneur who has combined his twin passions — food and cricket. Established earlier this year during the truncated version of the IPL, Chromepet Shawarma Kings is now back in business, with cricketing action having resumed. “My wife, Shehanaz Begam, and I love eating shawarma, but had to travel till Tambaram for it. We realised the need for a shop in our locality, and set one up,” says Arafat.

Also read: ‘Yenna Sonna’ is a song by a CSK fan, made for a legion of CSK fans

When it came to finding a theme, Arafat chose the sport he loves. An ardent fan of MS Dhoni, he modelled the interiors on the Chennai Super Kings.

For the menu, he conceptualised dishes such as Helicopter Shawarma, which is approximately 12 inches long, and a mug shawarma called the MSD Special Shawarma. The mojitos in the menu include a tribute to all IPL teams and features drinks named Orange Army, Grape Rider and Royal Strawberry. 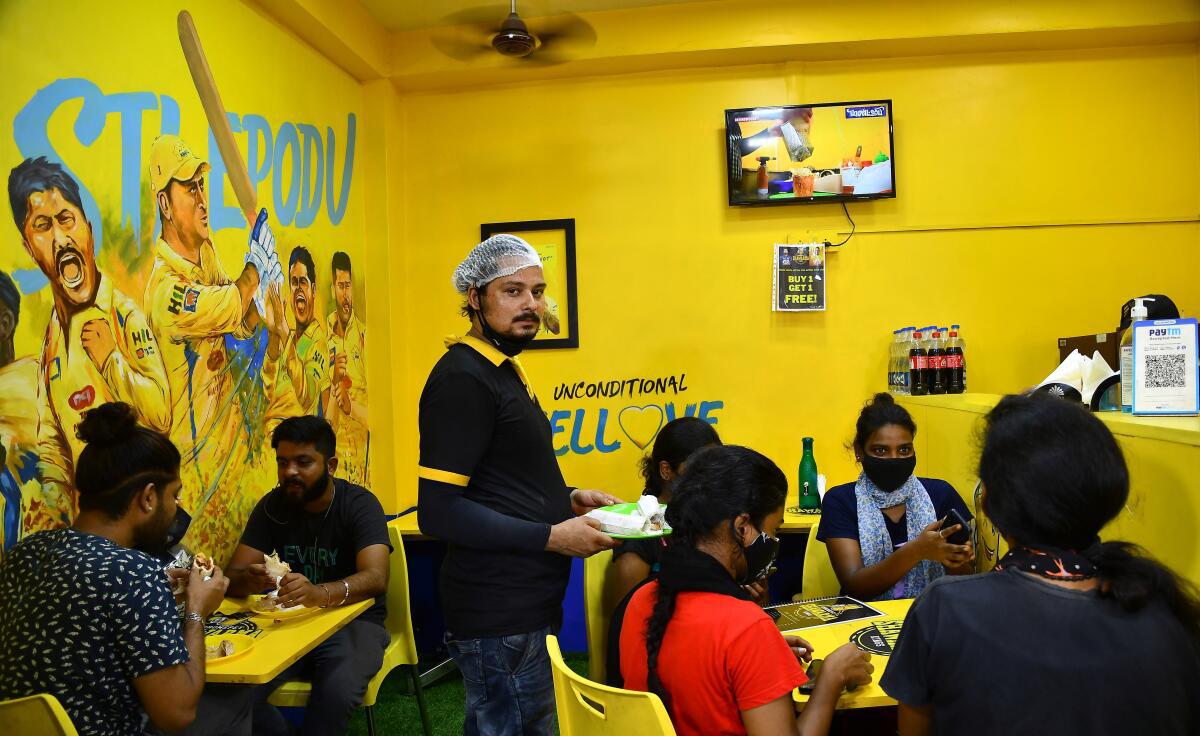 Even the menu at Chromepet Shawarma Kings celebrates CSK.

Arafat’s aim is not just to celebrate cricket in the menu and interiors, but to also create a wholesome experience for patrons. “When we go to the stadium to watch a cricket match, we soak in the atmosphere and make a lot of new friends. I hope to create such an environment in my outlet,” says Arafat, whose evenings at the outlet are currently divided between taking orders, coordinating with the chefs and keeping one eye on the cricketing action.

There are special offers during most CSK matches, like getting one shawarma free on your order. Also recently introduced are vegetarian shawarmas, with mushroom and paneer. “Our aim is to get people to come and watch the match with us.”

How ‘smart’ is the 21st Century Indian kitchen?

A portrait of Theyyam made with confections

Here’s why curated events are all the rage in Hyderabad