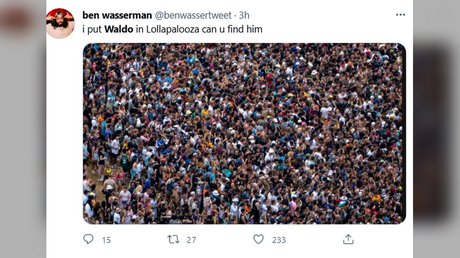 Photos of massive crowds attending the Lollapalooza music festival in Chicago have spurred Twitter users to humorously ask: “Where’s Waldo?” while the city’s mayor faced criticism for greenlighting the event.

To say the crowds at Lollapalooza are giving some anxiety would be an understatement. Despite Chicago Mayor Lori Lightfoot threatening a reinstatement of restrictions on the city this week if cases reach over 200 a day, even she was in attendance – and, at times, without a mask.

Lightfoot welcomed festival goers to the four-day event and thanked them for masking up. Per this year’s rules, only unvaccinated attendees or some 8% of all visitors have to wear masks at all times, and everyone should mask up indoors from Saturday. The rules also state that those who “are unvaccinated or at high risk for severe Covid-19” should “avoid crowded areas of the festival and stay at least 6 feet away from other groups.” Another recommendation urges festival goers, both vaccinated and unvaccinated, to “avoid physical contact with people outside of your party.”

However, such prudent behavior would be hardly feasible at the one of the largest music festivals in the world, which is taking place at full capacity, with pictures showing plenty of consumers, many of them packed so tight, they are touching the person next to them. Finding a mask in the crowd, some Twitter users joked, was like finding Waldo in a ‘Where’s Waldo’ book.

Did you see the enormous crowd at Lollapalooza, and not a mask in sight? People are saying finding a mask there is like finding Waldo. And in liberal Chicago. If that crowd’s not buying the new round of fear mongering, nobody is. People are going back to living.

It’s Where’s Waldo except you’re looking for masks. This makes me so sad even though they required either immunizations or a negative test because you can still get it and spread it with immunizations. So yeah, this won’t help us at all https://t.co/eQpUk0omsn

Some pointed to the delta variant, which health officials say can spread more easily and could even spread by vaccinated individuals, as a reason for concern about the festival.

Lightfoot faced backlash for her decision to let the event go ahead. Executive medical director at the University of Chicago Medical Center, Dr. Emily Landon, blasted the festival as a “spreader” event, which can spark “wildfires of infection.” “I think a lot of people are going to get COVID at Lollapalooza,” she told NBC 5 Chicago as the event was about to get going. Lightfoot brushed off the concerns, however, insisting that “the Lolla folks have a good, solid plan.”

Attendees of Lollapalooza were required to show proof of vaccination or a negative Covid-19 test before being allowed to enter the event. Organizers claimed on the festival’s opening day, Friday, that 90% of attendees had shown proof of vaccinations.