Nasdaq-listed Cognizant made news for its record attrition rate and extraordinary hiring goals even as the company revised its financial year revenue guidance upwards to 9-10 per cent in constant currency basis on Thursday. The information technology (IT) services major, which follows a January-December FY cycle, had earlier projected a growth of 5.5-7.5 per cent for the year.


For the quarter ended June 30, it posted a 12 per cent growth in revenue at $4.6 billion surpassing its guidance of 8.9-9 per cent for Q2. Digital revenue, constituting 44 per cent of the total pie, has grown 20 per cent year on year. The company has spent $2 billion since 2019 to bolster its cloud and digital play through acquisitions. Except financial services, growth for the quarter was broad-based with all verticals reporting a double digit growth year on year.


But, the company’s annualized quarterly attrition at 31 per cent prompted analysts to question Cognizant’s growth story. Its voluntary attrition touched 29 per cent on an annualized basis, and 18 per cent based on last 12 months (LTM). The company stated in its analyst call that it’s ramping up its hiring and skilling mechanism. The numbers came as a surprise. CEO Brian Humphries said the company expected to hire approximately 100,000 laterals and train close to 100,000 associates this year. “In addition, we expect to onboard approximately 30,000 new graduates in 2021 and make 45,000 offers to new graduates in India for 2022 onboarding,” he stated.


If attained, this would perhaps be the biggest hiring binge in the IT services sector in terms of numbers. “In India talent is in abundance, but what matters is the quality of talent. The area in which Cognizant wants to ramp up is already suffering due to dearth of quality talent. The number that it’s hiring will finally allow the company to create the next line of people with high-end talent,” said Pareekh Jain, founder Pareekh Consulting.


Rituparna Chakraborty, co-founder and executive VP, Teamlease Services, said the IT services sector was seeing huge volatility on skills aspect. “The only way companies can quickly ramp up demand for people is hiring laterals,’’ she pointed out. But for future looking projects focused on blockchain, IoT, cybersecurity, cloud and others, India as a country does not have the skill set numbers that are being demanded, according to Chakraborty. ‘’If supply side issues are not fixed there will be a huge impact on salaries as talent will get poached.” 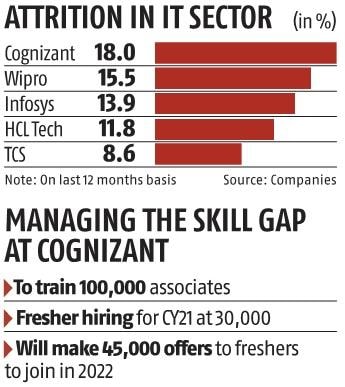 Cognizant is talking of steps to reduce attrition that includes compensation adjustments, job rotations, re-skilling and promotions. “Fortunately, we meaningfully increased our recruiting capacity over the last six months as we anticipated the spike in attrition, following the V-shaped demand recovery in the second half of 2020,” said Humphries.


Attrition has been going up for the industry as a whole, and companies are trying to retain high talent while simultaneously hiring freshers from campuses to augment demand. In a recent interview to Business Standard, V V Apparao, chief human resources officer at HCL Technologies, explained the current supply side. “Every company is sitting on deals that are three times what they see…. The war of talent is for the people in the range of three-four of experience and that pool is finite,’’ he said.


While stating that Congnizant had delivered a strong second quarter, Humphries said, “Through targeted investments, we’ve been shifting our portfolio to faster-growing market segments while extending our capabilities and partnerships to help clients build modern businesses. I see a stronger, more competitive Cognizant emerging, with growing commercial momentum. We are bullish on the industry and our prospects within it.”


The CEO admitted that the impact of supply side constraint was evident on the numbers. Despite its growth, the company’s been unable to meet the full expectations of its own potential and what is out there in the market, he said. ‘’So we’re working through that as best we can and doing our best, as I said, to minimize attrition, whilst at the same time to maximize employee engagement and to maximize onboarding,” Humphries said.

Gujarat: 24 ministers sworn in; not a single induction from Rupani cabinet