Round four of the Chess Super League saw three players dramatically losing their games due to offering a draw before move 40, which is prohibited at this tournament. With one round to go in the round-robin phase, the Kingslayers are in the lead.

It hadn’t happened in any of the games of the first three rounds but on Thursday, disaster struck. Three players had missed (or forgot about) the rule that offering a draw before move 40 is not allowed, and will be penalized with a loss. GMs Vidit Gujrathi, Raunak Sadhwani, and Iniyan P. lost their games this way, although the story for Sadhwani had more to it.

The penalty seems rather harsh, and Vidit tweeted about it afterward (making a reference to GM Hikaru Nakamura playing a game in the Chess Super League and simultaneously playing a game in Titled Tuesday two days earlier).

He got a retweet from GM Anish Giri while GM Arjun Erigaisi pointed out that he got away with a warning recently at an online tournament. 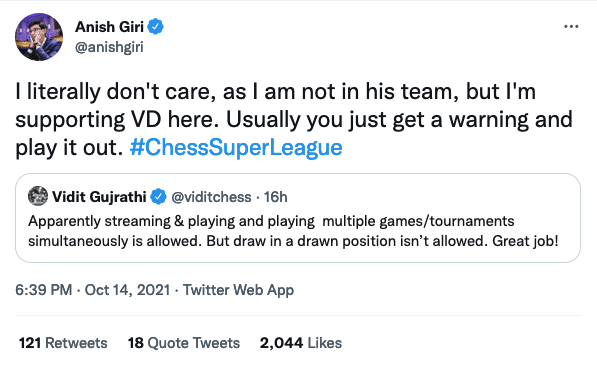 
In this match, Iniyan’s loss luckily didn’t matter for the match score as the Pivotal Pawns would have won anyway. Still, it didn’t seem right that this game didn’t end peacefully since it was basically a theoretical draw starting from around move 54.


As Giri tweeted, it was Brutal Bishops versus “brutal regulations” as both Vidit and Sadhwani are playing for that team. Two draws would have meant a 3-3 tie and a shared second place in the standings, instead of a shared third.

The final position for Vidit-Sasikiran was rather equal indeed, so Vidit’s unhappy tweet was understandable.

For Sadhwani, it went differently altogether but the result was the same. In a highly theoretical line of the Italian, the 15-year-old Indian GM was under the impression that there was a threefold repetition on move 22 and tried to claim a draw with the arbiter. (He wasn’t sure if the server would instantly decide on a draw or not.)

Because the arbiter didn’t respond immediately, the game continued for a while longer. At some point, the arbiter saw the message and decided to declare the game lost for Sadhwani because a wrong draw claim counts as a draw offer according to the laws of chess.

All in all, the situation was first and foremost confusing. “This was my point: there was no such regulation mentioning that a wrong claim of threefold will also be given as a loss or that a threefold will be automatically drawn by the server,” Sadhwani said.

In this match, Nakamura won a great fighting battle with GM Wang Hao, who did miss some chances halfway through the game. The engine finds a nice positional piece sacrifice for Black:


The sole leaders after four rounds are the Kingslayers, who won three matches in a row after their opening loss. Their 3.5-2.5 win vs. the Ruthless Rooks could have been 4-2 as GM Nana Dzagnidze missed a chance. Also here, the theme was long-term compensation for a piece:

The Chess Super League will continue with rounds four and five on Thursday and Friday, followed by playoffs and finals on Saturday and Sunday. The games are played with a time control of 15 minutes plus a 10-second increment. The total prize fund of the event is Rs.40 lakh (U.S. $54,000).