Callum Ilott has tested with Ferrari-powered Alfa Romeo previously and is also a Ferrari test driver.

Callum Ilott will take part in Friday practice for Alfa Romeo at the Portuguese Grand Prix this week and serve as second reserve when Robert Kubica has other commitments, the Formula One team said on Tuesday.

Ferrari Academy driver Ilott, 22, finished runner up to Mick Schumacher in the 2020 Formula Two championship but, unlike the German who is now at Haas, was unable to secure a Formula One seat.

The Briton has tested with Ferrari-powered Alfa Romeo previously and is also a Ferrari test driver.

“His journey through the junior series has been an impressive one and he is without doubt one of the most talented young drivers coming through the ranks,” said team boss Frederic Vasseur in a statement.

“He has worked with us before, each time leaving a lasting impression thanks to his work ethic and good feedback, and I have no doubt he will be a very positive addition to Robert Kubica, who will be unavailable on various occasions due to his other racing programmes.” 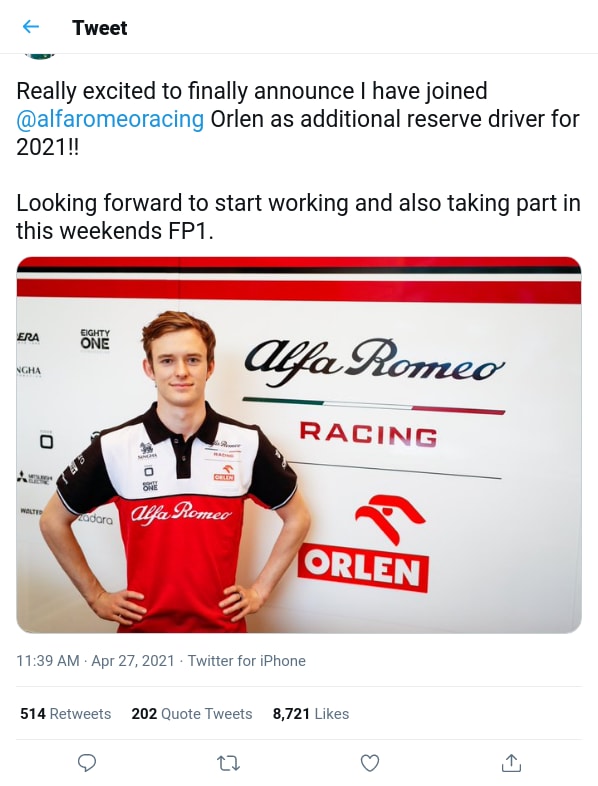 Former F1 racer Kubica, the only Pole to win a grand prix, is competing in sportscar racing this season.