Positional players are strong at tactics

A fortnight ago, I looked at three beautiful endings won by Magnus Carlsen and promised some more violent action by the world champion this time in a dessert of “blood pudding”.

I knew, of course, that this was some sort of meat dish but had to look it up to see what precisely. Apparently, it contains “fresh pork, seasoned pork blood, suet, bread crumbs, and oatmeal”. And while as a veggie now for over 40 years this doesn’t sound very appealing to me in real life, on the chessboard it’s just perfect.

When you  look at games by very strong positional players you may get the impression that they don’t like tactics and are perhaps not corruscatingly good at them. But this is almost always a mirage.

One reason that some top players avoid tactics is not that they don’t see them, but that they see too much and don’t want to have to calculate and perhaps avoid ideas that will very likely pass the opponent by. Tigran Petrosian was one wonderful example of this, and also Vassily Smyslov. 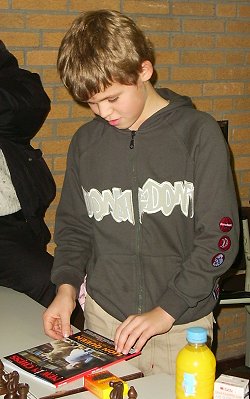 Even the most apparently harmless endgame grinders will occasionally get involved in a firefight either because it’s happened naturally in the course of a game or because something went wrong and they have had to go into “swindle mode”.  And when they do, then “ya-hoo moves” will come entirely naturally to them.

Carlsen is, of course, very far from harmless, with a superb grasp of tactics which he is very happy to unloose when appropriate. His wonderful technique also informs a fearlessness in the belief that if and occasionally, when things go wrong, he will normally be able to rescue the day by saving the endgame (though Ian Nepomniachtchi has a very safe pair of hands, so Carlsen will have to be especially careful in the match later this year and perhaps take fewer risks than normal).

In today’s games, Carlsen had absolutely no need to save himself since his opponents were already toast. We start with a game which Carlsen won at the age of just 13 [pictured] on the way to victory in the C group at Wijk aan Zee.  It’s one that I really should have seen at the time, but in fact (while choosing violent Carlsen wins) I was alerted to it by a YouTube video by American National Master Sam Copeland on another website.

This is followed by two rapidplay internet games from the last couple of years, in both of which Carlsen wreaked havoc on the long black diagonal.

Select an entry from the list to switch between games

Scarcely any world champion has managed to captivate chess lovers to the extent Carlsen has. The enormously talented Norwegian hasn’t been systematically trained within the structures of a major chess-playing nation such as Russia, the Ukraine or China.

How to create a chess video

Charanjit Singh Channi to be next Chief Minister of Punjab

Expect India to be one of fastest-growing markets: Salesforce India CEO