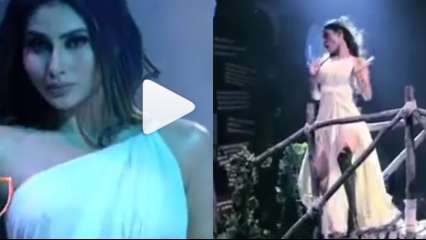 On the grand premiere of ‘Bigg Boss OTT,’ Mouni Roy, who is known for her great acting and perfect dance, has had viewers swoon over her as she dances to ‘Raat Ka Nasha.’ On a jungle-themed set, the actress was seen swaying to the song, which wonderfully complemented her performance.

Take a look at the promo here-

A media release from the team stated that laying out ‘sankats’ after ‘sankats’ for the inmates, Salman will welcome the contestants to the jungle in his own style dancing to ‘Jungle Hai Aadhi Raat Hai’. In his own witty ‘andaaz’, Salman will have candid interactions with the contenders ahead of the ‘dangal’. During the course of this special, the contestants will have to find out which animal do they resemble in this jungle; and to do so, they will have to face the ‘Awesome Mirror’ to see the reflection of the animal inside them!

This year, the makers have come up with a jungle concept wherein, apparently, the contestants will be required to stay in a jungle before they enter the main house. According to a recent tweet by Colors TV, former Bigg Boss winners Rubina Dilaik, Shweta Tiwari and Gauahar Khan are all set to enter the ‘Bigg Boss 15’ house with their own tribes.