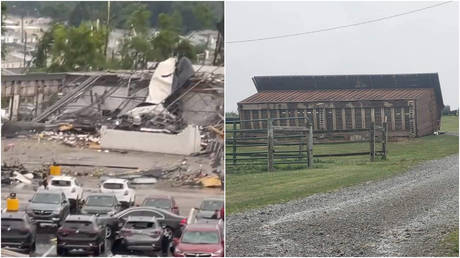 Two powerful tornadoes paved a path of destruction though parts of eastern Pennsylvania, leaving at least five people injured as authorities in one hard-hit county declared a “mass casualty” event.

The pair of twisters touched down in Pennsylvania’s Bucks County on Thursday, virtually destroying a car dealership and a mobile home park, local media reported. Five people were injured during the storm, Bensalem Police Public Safety Director Fred Harran said, though none were seriously harmed.

Dramatic photos and videos of the inclement weather circulated online, some captured by local news outlets, while other images showed the path of devastation left in the tornadoes’ wake. Some 8,000 homes and businesses were left without power after the storm, according to the Philadelphia Inquirer.

At least one tornado touched down in Bucks County, Pennsylvania on Thursday evening. One car dealership caught in the tornado’s path was heavily damaged, according to CBS Philadelphia, and a “mass casualty incident” has been declared, according to Bensalem Police Department. pic.twitter.com/cv7jewNssB

Bill Rollin, the director for emergency alerts for Bucks and two neighboring countries, told a local CBS affiliate that Bucks officials had declared a “mass casualty event,” though noted the term refers to any incident in which three or more people are injured.

One witness who was inside the auto dealership when the tornado struck, Joanne Szupka, described the harrowing incident, saying it came on abruptly and that “the whole thing lasted like 90 seconds.”

“I heard the alarm on my phone and it was seconds later that we felt something happening to the building,” Szupka told the Bucks County Courier Times, adding that she took shelter under a desk and was later pulled from the building.

Another local resident also captured footage of the dealership, whose roof was seen partially collapsed.

ABC meteorologist Drew Tuma described the twisters as “rare,” “violent” and “incredibly dangerous,” noting that that severe weather system was headed for New Jersey earlier in the evening. Bucks County is located near the Pennsylvania-New Jersey state border.

As of around 9pm local time, the National Weather Service’s Pennsylvania branch noted that severe weather advisories had been dropped for parts of the state, after downgrading previous tornado warnings for some areas.

The Severe Thunderstorm Watch has been dropped for portions of our region. See below for the current counties covered in the Watch. pic.twitter.com/QxXRULulBw