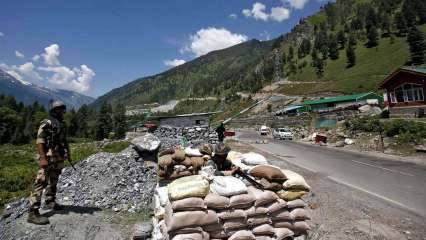 As troops witness a stand-off between India and China along the Line of Actual Control (LAC) in the eastern Ladakh region, Army Chief Gen MM Naravane said that a considerable number of Chinese troops have been deployed across the eastern Ladakh right up to India’s eastern command.

Addressing a news agency in Ladakh, the Army Chief said, “Chinese have deployed in considerable numbers all across Eastern Ladakh and Northern front right up to our Eastern command. Definitely, there has been an increase in their deployment in the forward areas which remains a matter of concern for us.”

As per officials, Army Chief Naravave had visited several areas in Ladakh to review the preparedness of India involving the standoff with China that has been continuing for the longest time. He was informed about the overall situation in the region and the 14 Corps that take care of the Line of Actual Control (LAC) with China in the Ladakh region.

Gen Naravane was also present in Leh for the installation of the world’s largest Khadi national flag on October 2, the 152nd birth anniversary of Mahatma Gandhi.

After the installation, Gen Naravane also visited the Rezang-La area and a war memorial to pay respect to soldiers who had died defending the country.

Recently, many reports suggested that China has placed several container-based accommodations for its troops in high-altitude areas on its side of the Line of Actual Control (LAC). The containers are installed in locations like Tashigong, Manza, Hot Springs and Churup among others.

On Thursday, India called out China for its provocative behaviour and unilateral attempts made by the Chinese military to alter the status quo that has resulted in a serious disturbance in the region.

No ‘Omicron’ case detected in India yet; Karnataka says sample of SA returnee ‘different from Delta’

Trinamool to tweak its party constitution