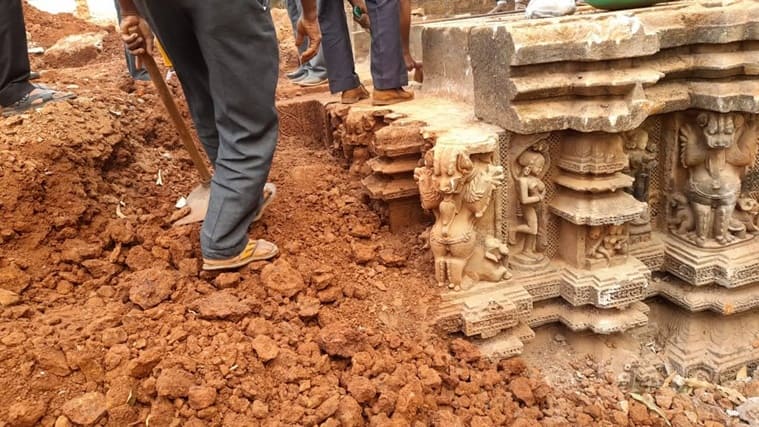 INDIA, January 31, 2021 (Indian Express): Workers and officials of the Archaeological Survey of India (ASI) engaged in a preservation and excavation exercise near Shree Lingaraj Temple, the most prominent temple of Bhubaneswar, have stumbled upon an ancient stone structure — possibly a platform on which one among the oldest shrines in Odisha once stood. The structure could be older than the 11th century Shree Lingaraj Temple, ASI’s top official in Odisha Arun Malik told The Sunday Express. He said the structure was found while the ASI was carrying out scientific cleaning of a piece of land near the Suka and Sari temple complex, close to the Shree Lingaraj Temple.

The discovery of the structure has created a buzz of excitement in the state, with Union Petroleum Minister Dharmendra Pradhan, who hails from Odisha, writing to Culture Minister Prahlad Singh Patel on Saturday to seek his intervention in the preservation of heritage. Pradhan also sought a visit by a team of experts from Delhi to study the structure. On the importance of the structure, Malik said the Suka and Sari temple complex may have been built in the Panchayatana model, in which four smaller temples surround the main temple. “Since three of the temples have been discovered now, we will look for the fourth temple,” he said. “It will be a challenge because of all the demolitions that have been carried out in the area.”

Share This :
Tags: A, and, archaeological, asi, engaged, excavation, exercise, express, in, India, Indian, January, near, of, officials, preservation, source, Survey, The, workers