In the Economic Survey for 2020-21, tabled in Parliament on Friday, Chief Economic Advisor Krishnamurthy Subramanian strongly defended the government’s actions in response to the Covid-19 pandemic, and also laid out a case for ignoring the build-up of debt and turning on the fiscal taps in the forthcoming Union Budget.


The Survey saw a “V-shaped recovery” from the lockdown-induced crash in the first quarter of 2020-21, with only a “modest decline in GDP growth in the second half of the year”, and a “faster-than-anticipated economic recovery”. The Survey further argued that a “supply-side push from reforms” and infrastructure investment, the roll-out of the vaccine, and targeted moves like the production-linked incentive scheme for manufacturers would lead to real growth of 11 per cent in 2021-22.


The scars from the pandemic, however, will remain. The Survey admitted that, even if India returned to its five-year historical average of GDP growth, 6.7 per cent, as fast as 2022-23, real GDP would still only be 90-91 per cent of what it would have been without the pandemic.


ALSO READ: Budget to be seen as part of mini budgets of 2020, says PM Narendra Modi


In order to deal with the pandemic, the government raised its target for gross market borrowings for 2020-21 from the Budget Estimate of Rs 7.8 trillion to Rs 12 trillion. State governments also saw a borrowing increase of over 40 per cent. The Survey views this increase as “demonstrating the government’s commitment to provide sustained fiscal stimulus”. Although admitting that, globally, “debt levels have reached historic highs, making the global economy particularly vulnerable to financial market stress”, Subramanian nevertheless makes a case for India to take on yet more debt, claiming that “given India’s growth potential, debt sustainability is unlikely to be a problem”.


No assurance, however, is provided by the Survey that this trend will continue into the future, given the shrinking of India’s potential growth; in data released on Friday, growth in 2019-20, prior to the pandemic taking hold, was revised downward to 4 per cent, the exact midpoint of the Reserve Bank of India’s inflation target.


Taking aim at the government’s fiscal conservatism, the Survey claims “printing more money does not necessarily lead to inflation and a debasement of the currency”, but could – if invested in projects with positive “societal value” — actually “be beneficial to citizens”.


The Survey claimed that India’s trajectory during the pandemic was unique, and argued that “the upturn in the economy while avoiding a second wave of infections makes India a sui generis case in strategic policymaking amidst a once-in-a-century pandemic.”


Taking aim at alternative theories for the limited number of deaths in India – such as, for example, greater population resistance – the Survey assigns complete responsibility for the relatively low population mortality in India during the pandemic to the draconian nature of the initial lockdown. Indeed, it also argues that not only did the “stringent lockdown saved lives”, but it also “supported a V-shaped recovery across all the economic indicators. 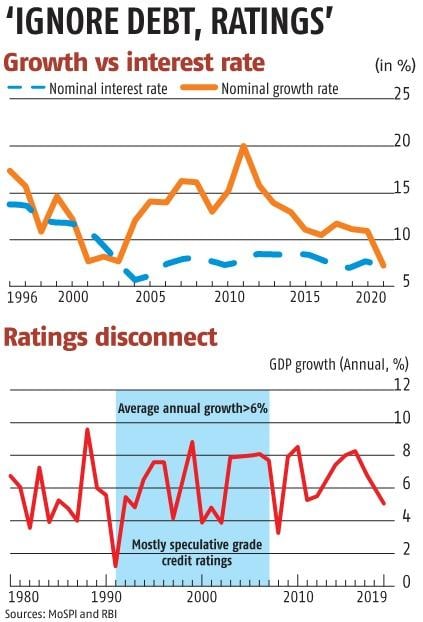 The Survey further claims that “costs and opportunities” were weighed “strategically” before the first lockdown, and it presented some basic calculations to conclude that government management led to India having 3.7 million less cases than expected.


The Survey conducted a similar back-of-the-envelope exercise – using population density, global numbers, and demographic profiles – for the various states of the Union, concluding in this case that Kerala and Telangana had saved the most lives, while Maharashtra “has performed the worst in number of cases and deaths”. The Survey also made the politically effective, though economically questionable, decision to compare the effectiveness of pandemic control in globalised Maharashtra on the one hand and in Uttar Pradesh and Bihar on the other, concluding the latter states’ policies therefore “held India in good stead”.


Arguing that the regulators’ forbearance on bank loans was necessitated by the pandemic, the Survey nevertheless makes a strong call, based on the experience following the financial crisis of 2008, for withdrawing that forbearance quickly. It says that “when an emergency medicine becomes a staple diet, it can be counter-productive”, and says that an Asset Quality Review should be “conducted immediately after the forbearance is withdrawn”.


It also praises the relief packages, indicating that they were calibrated and used “Bayesian updating”. It noted that there was no point in stimulating demand when supply was constrained during the lockdown, comparing it to “pushing the accelerator while the foot was firmly on the brake”. The time for stimulus, however, according to the Survey, has clearly arrived. In fact, it demands “a sustained, productive programme of permanent stimulus directed towards public investment, in both human and physical capital”.


Concerns about debt sustainability and credit ratings downgrade in the face of “permanent stimulus” are dismissed. Arguing that India’s willingness and ability to pay its debt is evident through history and through the size of its foreign exchange reserves when compared to the tiny proportion of sovereign, foreign-currency-denominated debt.


The Survey attacked global credit ratings of India’s sovereign debt, currently one step above junk status, as not reflecting India’s fundamentals, and being “noisy, opaque and biased”. Government spending should therefore ignore not just the debt to GDP ratio, but also the threat of downgrades, argued the survey: “India’s fiscal policy, therefore, must not remain beholden to a noisy/biased measure of India’s fundamentals and should instead reflect Gurudev Rabindranath Thakur’s sentiment of a mind without fear.”

‘India should have strategic fuel reserves to manage demand shocks’